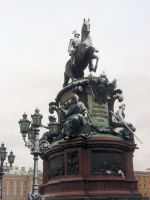 Monday: Cold snowy weather for the last day of April. I struggled more with my classes today. We had five hours of class and the classroom was cold until we found a space heater. Shortly thereafter the power went out and unfortunately we were cold again. Somehow I couldnâ€™t remember the pronunciation for various reflexive verbs. The blowing snow flurries did make me happy to be a student today and not a bicyclist. I took the metro with a stop at a cafÃ© before coming home and studying some more. I am also reassured that this is colder weather than normal so hopefully it gets out of the system before mid-May. 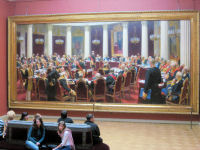 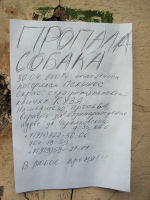 Wednesday: There is a lot to remember. Each day, five hours of lessons brings more to learn. Today wasnâ€™t particularly difficult though mostly a case of trying to remember the perfective and imperfective forms of many verbs. I try to review them several times a day: when I get home, before going to sleep, when I wake up and before class but still tough to remember them all. Today it was also nice to figure out that when my host asks: Ð²Ð°Ð¼ Ð¿Ð¾Ð½Ñ€Ð°Ð²Ð¸Ð»Ð¾ÑÑŒ? That this translates into â€œdo you like it?â€ â€“ I didnâ€™t quite get all the syllables worked through and hence difficult to look up in the dictionary, so now I tell her I like these various foods. My dictionary does get a good workout each day.

This afternoon I made a slow walk in the rain from school to Sennaya Ploshad and then a visit to the Russian museum. The museum has a good collection of Russian authored paintings though probably good to have a guidebook or guide to point out the highlights (or be more of an art historian than I).

Photo at right, shows I get lots of opportunities to learn additional Russian language; even occasionally stopping to figure out posters such as this one of a lost Pekinese dog. Iâ€™m sure the natives find it strange to have tourists with Russian/English dictionaries reading their â€œlost dogâ€ posters and figuring out the vocabulary and grammatical structure. (Moral of the story: if your spelling or grammar is poor, do not lose your dog near a language school?). 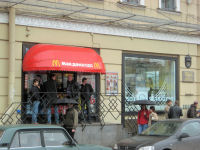 Thursday: St Petersburg has its share of familiar fast food restaurants catering to tourists. However, I found I prefer the smaller cafes instead. The Subway goes so far as to spell its name in Cyrillic letters (ÑÐ°Ð±Ð²ÑÐ¹) and has familiar menu items spelled in Cyrillic. I visited Subway and tried to use my Russian as much as possible. However they quickly figure out Iâ€™m English speaking and switch to being helpful in English. Note: if you click on the photo, youâ€™ll see an additional reason I took the photo: while rare, I do occasionally see bicycles on streets such as Nevsky Prospect.

The photo at right shows a nearby McDonalds with the pedestrian equivalent of the drive through.

In contrast, today I had lunch at a small cafÃ© whose owner was from Uzbekistan. He also figured out I wasnâ€™t Russian but we had the conversation in Russian about where I was from and what I was doing in Russia. At the same time, I learned a little more about the (warm) weather year round in Tashkent. These small cafÃ© owners are providing a good service in not only food but also Russian language practice.

Today the grammar lesson was more straightforward. I found I am more limited by vocabulary than grammar. There are still many different words to keep learning and picking up each day. I find Iâ€™m remembering more words though also forgetting and re-remember some of the same words. There was an excursion scheduled this afternoon to wander through Dostoevsky neighborhoods though it was cancelled since we didnâ€™t have the minimum number of participants (4). So I read Dostoevsky instead. 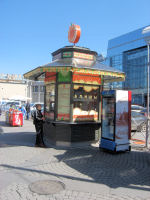 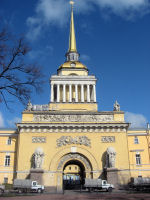 Friday: Now time for a weekend! We found our way to the last case today (dative), and still more perfective and imperfective verbs. Iâ€™ll have plenty to keep studying on my way across Russia, though will mostly miss the corrections to my grammar. We seem to be alternating nice weather with rain/snow so today time for good weather and another walk through the city. My regular haunts are becoming more familiar as I learn a lot of the center of the city. The Saturday excursion to Pavlovsk was cancelled due to lack of interest so perhaps time to explore nearby areas on my own during my last weekend in St Petersburg.