Weekend was time to be a tourist again, this time with a visit to the palaces at Petrodvorets (known as Peterhof before 1944, and often referred to by that name now). Petrodvorets was a large country estate about 30km from St Petersburg. Started with just a simple villa by Peter the great, several large palaces were added by Empresses Elizabeth and Catherine the Great. The area was destroyed during the Second World War and reconstructed in the 1950s.

One of the biggest attractions is a series of 140 gravity fed fountains that are turned on during weekends during the summer. I didnâ€™t see them today, since they are not yet on for the season.

I did take the tour of the large Grand Palace shown above left. They seemed to want all tourists as part of some tour group, so I tagged along with a Russian speaking tour group. The guide spoke quickly enough that I missed a bunch, but I could follow when she pointed and ooh and aah with the rest. The palace reminded me of the Catherine Palace I saw last week. Not a big surprise as Rastrelli designed both. Each room seemed to have a theme. One had large paintings of the destruction of the Turkish fleet in 1770. Another had entire walls filled with these small portrait paintings. There was of course an abundance of gilded ornamentation and statues. 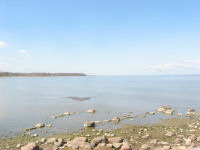 After rain early this morning, it was a nice sunny day, so the grounds were also nice to walk around. The fountains empty into a canal that goes down to the Baltic Sea. Hopefully the next salt water sea I photograph will be associated with the Pacific Ocean.

Today was also an interesting exercise in using Russian public transit. Transit is excellent in this city with a metro (4 lines, 6 transfer stations and trains coming every two minutes or so), buses, electric trains, trams, suburban trains and â€œMarshrutkaâ€. Marshrutka are these little van buses that operate on fixed routes. I took the metro to Baltisky train station. From here it was easy to find a Marshrutka 404 that my guidebook indicated went to Petrodvorets.

I had more difficulty knowing when to get off the Marshrutka. Several people got off at what I thought might be the stop, but I stayed on to the next stop. Turns out, I had missed the stop, so walked back about two kilometers. Getting back was a little easier, as I found multiple Marshrutka marked and took the next one that came along and was heading to a metro stop. I also had some fun knowing how much to pay (you pass your money to get forwarded to the driver), but I watched others and figured out 30 rubles.