A few notes from my last week of school in St Petersburg. 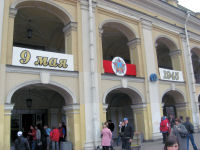 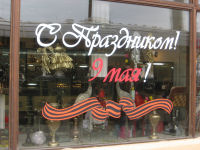 Monday: I notice more signs and banners going up about the upcoming Victory Day holiday. Not certain, but Iâ€™m also seeing more soldiers and sailors in uniform walking through the city streets. The 62nd anniversary of the end of World War II is still clearly an important holiday (huge sacrifices were made and ~25 million Russians died â€“ this compared to less than one million for US and Great Britain combined). Most of the museums are closed today, so a day to wander though the city. It is also warmer today and finally feels a bit more like spring than winter.

Lessons were more straightforward again. Iâ€™m remembering more, though still feel like Iâ€™m held back some by not knowing enough vocabulary. I still try to review after school, before bed, in the morning and again before school. 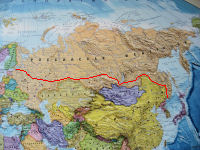 I found an interesting great circle program. For my likely route, following are some â€œas the crow fliesâ€ distances from St Petersburg:

The actual distances will of course be longer. For example, I expect road distance around 6200km to Irkutsk and 11000km to Vladivostok. As a comparison, I am 8150km from home, so not that much further than to Vladivostok. 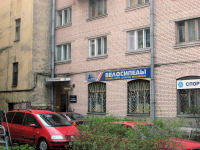 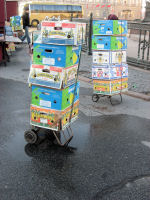 Tuesday: My bicycle isnâ€™t ready yet. I walked to the bicycle shop after school and they said it wouldnâ€™t be ready until end of the day tomorrow. Not quite sure why. They said they called, though I donâ€™t know how to access phone messages and donâ€™t see any indication of missed calls. Tomorrow is a holiday, though they told me they work until 7pm. I will stop by tomorrow evening, but will feel less worried when I have my bike back. What they need to do is simple and theyâ€™ve had nine days so far. [Footnote added later: The bike was done the next day!]

Today we started lessons an hour later. We went through some new topic material including imperative forms of verbs. After a few weeks of intensive classes, Iâ€™ll be ready to have some of this soak in further and just work on learning more vocabulary. Not quite sure what I can after that to keep learning some more language. I had some additional vocabulary at the bicycle shop â€“ though it took some time to make sure to clarify when I asked â€œwhat timeâ€ and they said 7pm, whether they were indicating when the shop closed or when the bicycle would be ready. It was actually both, though then they indicated to stop by at 6:45pm.

The photo at right shows, that regardless of the box, the bananas I see here come from Ecuador. 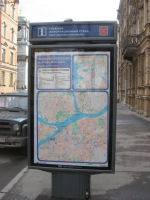 Thursday: Working through my grammar today, I seem to get myself confused at times. It works better if I stop and carefully think through things and then I get them right. We’re touched on another case (instrumental) today. It is nice to know when the blini vendor asks “Ñ ÑÐ¾Ð±Ð¾Ð¸” that they are asking if I want to take it with me. Sort of fun how I have grammar lessons and then immediate on street applications. Today I understood the question and answered affirmatively. The blini vendor smiled.

Some overall thoughts about the school and the home stay (1) the school is quite well structured and organized, it is clear they have done this many times before and have developed and fine tuned a set of systems, teaching materials and procedures to work with many new students (2) I am impressed with the patience shown by the staff â€“ so many different little interactions where opportunities for misunderstanding abound and yet the staff was extremely patient with us students (3) immersion home stay has been good, I struggled a bit at times though would definitely prefer this to other alternatives. For someone who wants a more rigorous introduction to Russia, this seems like a good start to the country; though I would also recommend having taken some language lessons before. I also like the different perspective I think I have on living in St Petersburg than a classic tourist view. It has also been nice to work through simple transactions such as having a bicycle serviced.

By now I am also getting excited to be on the road again. Mickey and I met up to walk through town and for dinner. That also helps some of the excitement to actually be getting on the road soon. 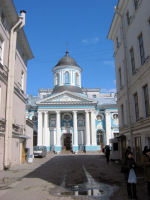 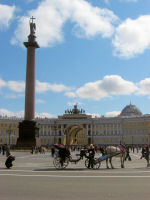 Friday: Last day of school today. We worked through comparisons, superlatives and just barely touched on several additional prefix forms added to the verbs of motion. My mind wasn’t concentrating quite as hard today and struggled occasionally. However, I do feel like I’ve built up more Russian in these past weeks, particularly a solid review of some of the grammar and picking up some more vocabulary. At the same time, learning this language is tough and feel at least as much of how much more I need to keep learning.

Towards end of the day, the Liden Denz school came and presented me with a completion certificate. On the language level scale, my speaking/listening was listed at A2 level and my reading writing at A1+ level. I think they were generous, but I had my own final exam in mind. As a bicyclist, I had extra gear including school books and some clothes that I wanted to send away. Hence, the immediate goal was to find a post office and see if I could mail them away.

I walked down Nevsky Prospect to where I had seen an Express Post, first door on the right sign. I went to the door, but the lady told me Westpost was now elsewhere. Fortunately, a second person helped me find their door. At Westpost, they looked at my bag of things and told me I needed to go to the regular post office and sent me to yet a third post office. I walked to the third post office. Once again, long lines. Finally, I gave up and walked to where I had seen a “DHL” sign. At the DHL office, I asked how much to send just my school book. It was a bit expensive but probably the critical thing to send away. The extra clothes and school notes are probably more expensive to send than they are worth, so I’ll carry the clothes some more and copy over the notes. So much for the final. As far as the Russian Post office goes, I probably am somewhere around A1+ or almost A2.

I noticed that Herman Veldhuizen has a tough issue on his bicycle trip to Tibet.

I am not sure where we’ll next see an internet connection. From here we’ll first take off eastbound and on our way across Russia. I’ve enjoyed my time in St Petersburg, but also excited to almost be on the road again.