Today we left the big city and started our ride to ÐÐ¾Ð²Ð¾ÑÐ¸Ð±Ð¸Ñ€ÑÐº. It is interesting how much contrast we have between rest days in the city and days on the road. Several factors conspired to make today a slower day than normal.

Our hotel included breakfast with the room, so we waited until almost 8am when the breakfast started. As we left the hotel, the staff was excited to help us with our luggage and gave us big waves as we left (I think they were excited about the trip, not that they were happy to have us leave). We cycled back over the bridge and into the big city. We stopped briefly at the internet cafe to check on potential apartments in ÐÐ¾Ð²Ð¾ÑÐ¸Ð±Ð¸Ñ€ÑÐº. Unfortunately, it wasnâ€™t working. The staff said â€œ15 minutesâ€ in the same tone that airline staff tell you when they arenâ€™t sure when you might leave but â€œcheck back in 15 minutesâ€. Not wanting to play that waiting game, we continued on. Our maps and the signs directed us in a zig-zag route out of town that eventually ended up on the northern road out of the city. Ominous clouds loomed to our west and then we saw lightening. We continued for a bit, but as sprinkles turned to rain, we took refuge under a bus shelter. We spent the next while in the shelter with a variety of people who came and went from the buses. Finally, rain turned back to sprinkles and we set off.

The light rain continued until the turnoff to ÐšÐ¾Ñ€Ð¼Ð¸Ð»Ð¾Ð²ÐºÐ° at 36km. Just as we reached the turnoff, Mickey ran over a piece of glass and we had a flat to fix. After fixing the flat, we ate in the cafe at the turnoff.

The next 17km to ÐšÐ¾Ñ€Ð¼Ð¸Ð»Ð¾Ð²ÐºÐ° were a bit slow. The rain had stopped, though thick globs of mud occasionally were on the road. They would stick and rub under my front fender. This area was more agricultural, though Iâ€™m still not sure what they grow here other than hay. At 54km we came through ÐšÐ¾Ñ€Ð¼Ð¸Ð»Ð¾Ð²ÐºÐ°. We rode more eastbound here, including some kilometers directly into the wind. It was starting to get late, so we found a village right next to the train tracks to get water and end the day.

The villagers directed us to a well, which was unfortunately was dry. We used another nearby well â€“ not sure if we should or not. We asked about the store that appeared to be locked and closed. However, as we asked, a teenager went to find the clerk and they opened the store for us. From here, we were refueled and cycled a short distance down the main road before finding a place to camp. We are close to the main train tracks and hear many trains coming down the line. 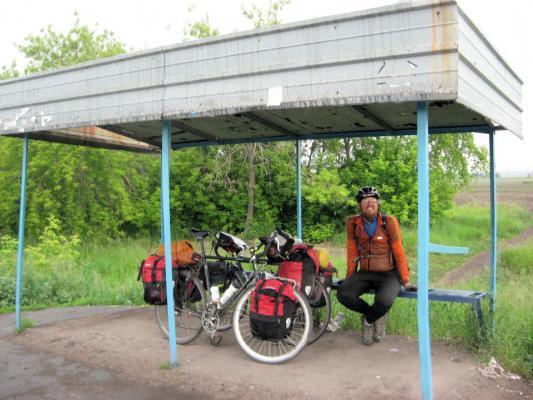 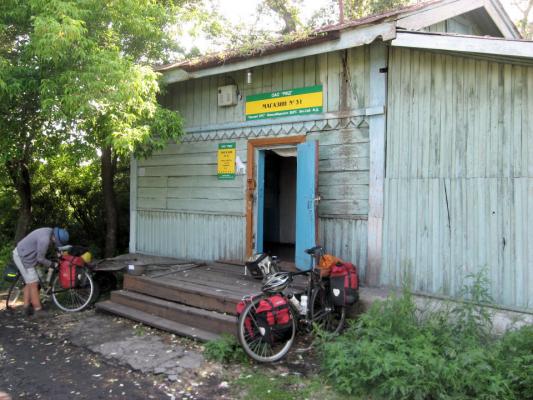