Its hot! Chocolate bars are melting in Siberia. We came to the major Омск/ Новосибирск highway today. So far the road is in reasonable condition and traffic has been light. It is a straight and flat road. There are occasionally clusters of trees, but fewer than before Омск.

We lost track of each other today and had to regroup. I left early and towards the town of Калачинск. Before leaving, I told Mickey that if there was a cafe at the spot where the road from Калачинск met the main highway, I would stop there for breakfast.

At 11km I was in Калачинск. Most of the town was still closed. I crossed the railroad and just before leaving there was a fork in the road. I asked some at the bus stop “which way to Новосибирск”. They pointed to the left fork. At 20km I was at my cafe intersection, but there was no cafe. I knew it would be a while, so started down the main highway. A few kilometers of rough concrete and some rough asphalt but otherwise a good road. I was getting a bit hungry, and so was happy to find a cafe at the 59km mark at the turnoff to Ивановка. I was surprised that Mickey hadn’t caught up, and even more when my wait turned into an hour and a half. I had gone outside and started to ask motorists as they came in. Eventually some told me they had seen her, 40km away, 15km away.

Finally, Mickey arrived. Apparently in Калачинск she had been told the right fork where I had been told the left fork. She intersected the main highway, 6km further west. Worse there was a cafe where the right fork met the main road. When she reached the main highway, she didn’t see me at the cafe and so thought I might still be in town and she waited, and waited. Eventually some motorists indicated I was ahead and she hurried to catch up. Sigh, easy to get separated here.

After regrouping at Ивановка turnoff, we continued on the main road and crossed the oblast boundary into Novosibirsk oblast at 63km. A little later there were signs and then a nice cafe at 85km appeared. It had a cool veranda for a hot day and a water truck with cool water. We went just a little further before finding some trees to camp underneath in the heat of the afternoon. There were many insects again here. It was still warm, and so a quiet relaxing afternoon, waiting for it to cool down in Siberia. 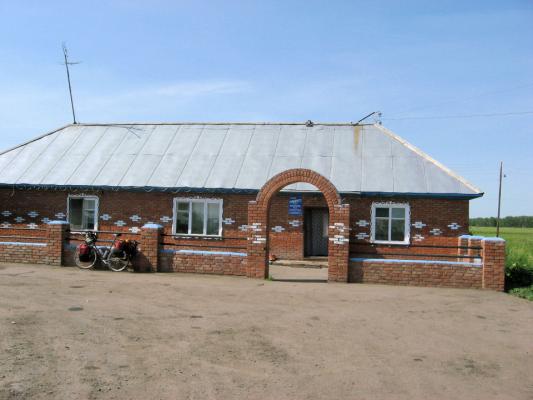 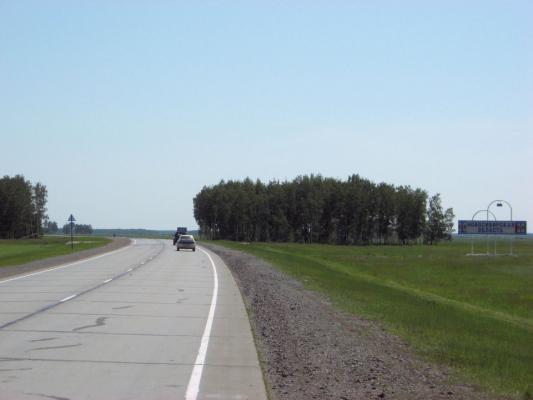