Mosquito patrol at midnight. Quick shut the window! Now with towels we zap as many as we can. A few leave red blotches. Others are smashed against the walls. We had left the door and window open in the motel to allow a cooling breeze. The breeze also kept the mosquitoes at bay. At midnight, the breeze stopped and hence the need for our mosquito patrol.

After breakfast in the motel, we found it lightly sprinkling. The cat below decided it liked my panniers more than the wet ground. It had at least cooled down enough and was refreshing compared to yesterday. We had a delightful cool ride for 25km to reach our first cafe. The rain stopped but it was still cool.

After breakfast it wasnâ€™t clear when we would find the next stop. Signs said 80km. The road became a little worse as well: narrower, more traffic and worse surface. At 56km a second sign appears for â€œ20km cafeâ€. Three kilometers later it started raining. The rain came down hard, but I had a goal in mind and kept cycling. I was good and soaked and ready for my lunch. We ate slowly and waited for it to subside. Fortunately, it slowed down. This next stretch the road was also worse. We continued past both exits for Ð‘Ð°Ñ€Ð°Ð±Ð¸Ð½ÑÐº and had a nice truck stoop a few kilometers later at 113km. We refilled on water and then set off to find a place to camp. There arenâ€™t many trees here.

Weâ€™re seeing many more right hand drive cars on the road here. Apparently bought in Japan and brought over here. Some trucks still have the Japanese lettering. 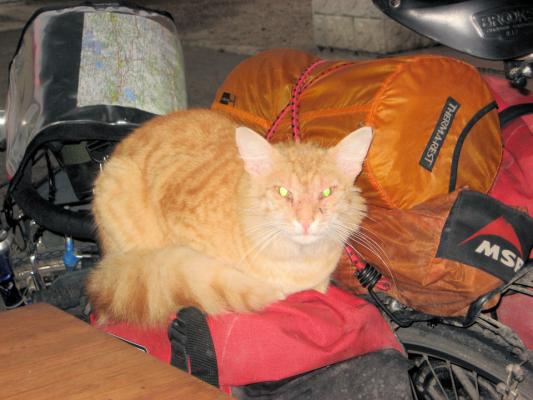