A drenching rainshower, followed by a quick setup of the tent in a mosquito-infested swamp reminds us that days on the road are different than days in the big city. Despite all that, it is nice to be riding again after those rest days. The new hub handles well. It will be time for some new drive train components in Irkutsk.

After breakfast we packed everything on the bikes and headed out of the city. Sunday morning traffic was light and our maps made for an easy exit of Siberiaâ€™s largest city. At 14km we left the city limits and at 17km the first highway signs for Ð§Ð¸Ñ‚Ð° almost 3000km away.

Today had a few more hills but nothing bad. I hoped we might trade mosquitoes for hills but looks like the hills were more of an addition. The road was in reasonable shape, with worst roads right at the end. We went through a few villages and then around Ð¡Ð¾ÐºÑƒÑ€. At ÐœÐ¾ÑˆÐºÐ¾Ð²Ð¾ was a nice lunch stop at 58km. From here mostly flat and then another cafe at 82km. Here Oxana, a 13-year old girl practiced here English lessons with us, while the rest of the family listened with curiosity at these strangers who had come to visit.

As I was coming down a hill at 93km, my rear tire felt squishy. I pumped it up, but at 96km it was squishy again. This is the same tire Iâ€™ve had since Amsterdam and the tread is worn off (though the rest of the tire still has some wear). I decided to swap tires and tubes at once to diagnose things later.

After the flat cycling became more challenging with rain showers passing through. My flat also made for a late arrival at the next stop where Mickey had an invitation from a Kurdish family to stay. They spoke some German. We crossed wires a bit and instead ended up leaving to camp down the road. Finding a campsite was difficult. First two side roads were too wet. The third was marshy as well, but we ended up setting up on slightly higher ground. Mosquitoes are as bad here as weâ€™ve seen during the trip. Nice to be cycling again. 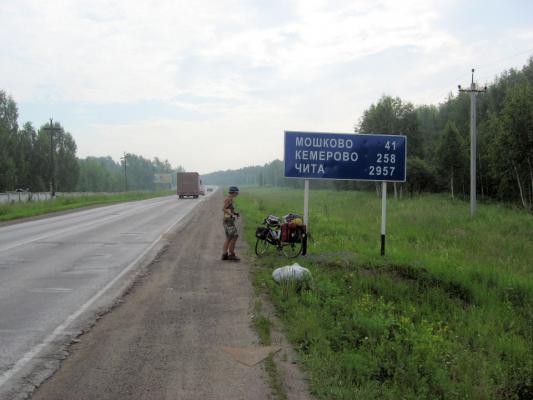