Today we crossed Кемерово and were back on the main highway. There were more hills today, particularly the last third of the ride. The morning started foggy. The grass was tall and the mosquitoes were still asleep as I left. The first hill was in the first 2km. After this, the first 18km had more rolling hills before descending to the Томь river valley. Fields were planted with some form of grasses or grains. My glasses were fogged by the mist for most of this section.

After Мозжуха at 20km the road stayed flat along the river. At 34km we came to outskirts of Кемерово. Compared to other cities of half a million, it was easy to cross this city by following “M53” signs. We didn’t see much of the city other than industrial areas. At 41km we crossed the bridge across the Томь and then had several kilometers of climbing before a brief breakfast stop at a shop.

As we were cycling out of town, two reporters flagged us down. We gave our third press interview. Perhaps our smiling faces will show up in the Кемерово newspaper from one of many photos they took. After the interview we continued on a busy but good condition road. Traffic kept becoming less and less and shortly after Березовский at 68km we had a cafe and lunch stop (this journal must sound like a cafe to cafe ride but they really are plentiful enough that one can get most of your food along the way without having to carry too much along; I expect it to change in far eastern Siberia).

Our last 32km were tough. The road would climb a long hill only to then descend on the other side. Up and down, we kept crossing from drainage to drainage. I was slow at both climbing and descending. We were happy to have Успенка come ar 100km and call it a day. We camped in a pretty meadow. The tent site has a few more ants and is closer to the road noise but otherwise a pretty place. 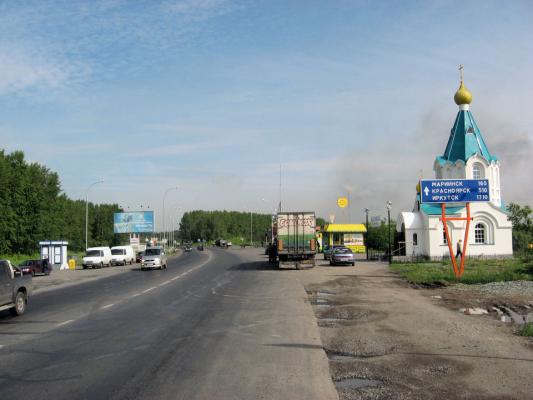 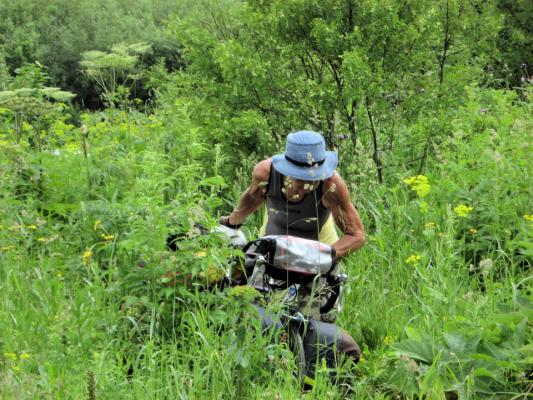