The amount of insect life seems to have stepped up a notch. As it gets warmer, the large horse flies come out. They buzz around the bicycle and sometimes land and bite. When weâ€™re walking the bike to find a campsite, they multiply until we are covered with them. They climb underneath the rainfly and buzz away.

My first tent site here didnâ€™t have any horse flies. The problem was the ants. They were everywhere and had even picked off all the horseflies that landed. Unfortunately my gear was outside (in this one person tent) and the ants were also everywhere inside. I was being driven crazy by the ants. I finally packed everything up and moved away. This new site also has ants but in better balance. There are even flies still buzzing under the tent. There are still ants crawling over the tent. Some ants I call â€œrodeo antsâ€, run up to a fly and grab a leg and hold on. Most of the time, the horseflies is able to buzz off and shake off the rodeo ant. Sometimes the horsefly with extra passenger dives with the extra weight and gets stuck in the rainfly. If the timing is right the rodeo ant gets a helper and together they wrestle with the large fly. I saw many horseflies get captured this way by the ants.

Roads today were in worse shape and we had some more hills than yesterday. After some late days, we wanted to try to end today a little earlier. Plenty of mosquitoes when I packed my tent, so I was gone quickly. The road was narrow and there was a moderate amount of traffic. Worse, the surface was a patchwork of fixes. There were several hills to climb and half way up one of those hills at 38km was a cafe.

From here the road went mostly through forested areas. The railroad had curved away, a sign that hills were soon to follow. We decided to ride to Ð˜Ñ‚Ð°Ñ‚ÑÐºÐ¸Ð¹ at 80km and then see about camping. The town of Ð˜Ñ‚Ð°Ñ‚ÑÐºÐ¸Ð¹ had a bypass. I took the bypass but missed chalk arrows Mickey had left and so continued straight when she went into town. At the far end of town at 87km was a cafe where I stopped with no sign of Mickey. I ate at the cafe and eventually Mickey came from town where she had been waiting for me.

From here we went to find a place to camp. The first two roads were too swampy and filled with insects. Just past the oblast boundary was a promising spot. We were interrupted by local out chopping wood and the ants were ferocious but otherwise it was ok place to camp. 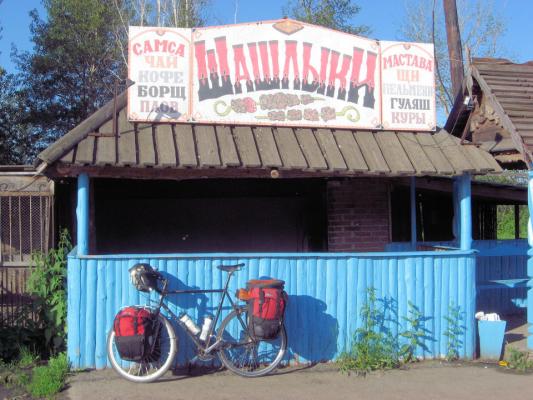 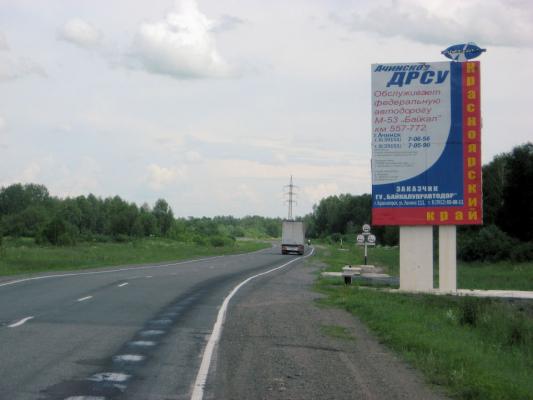