The road width varied like an accordion today. Sometimes big and wide four lane highway. Sometimes narrow bumpy two lanes. It kept changing back and forth. We had a warm ride today as we road a majority of the remaining distance to ÐšÑ€Ð°ÑÐ½Ð¾ÑÑ€ÑÐº.

Last nights camping spot was the best weâ€™ve had in a while and I left without many mosquitoes. The road was wide and smooth. It climbed some gentle grades and continued to do so for much of the rest of the day. Today was mostly wooded and not agricultural. There were a only few large villages so finding a cafe outside ÐÐ¾Ð²Ð¾Ñ‡ÐµÑ€Ð½Ð¾Ñ€Ñ‡ÐµÐ½ÑÐºÐ¸Ð¹ at 30km was a pleasant surprise.

After this we had smoother roads and the accordion was at full width. Once we climbed up top of the hills, it was mostly level. The next cafe was at 52km. A little early, but we didnâ€™t know when we would find another one. Many local vendors here selling woodwork or birch branches bound. Two brothers from Kazakhstan and their friend from Russia were very curious about our trip. They told us we wouldnâ€™t have another cafe for 60km. It was getting warm, so we topped off on water and set off for a long hot ride.

The road started smooth but then the accordion narrowed and it became very rough. We climbed a few hills and it became hot. On the uphills the horseflies would periodically land and I had to swat them away. It was a long slow ride. Hence, the cafe at 81km was a pleasant surprise.

The accordion flexed a few more times as several â€œexpeditionâ€ cars passed. Someone hung out the window and started a video of me riding, just as I hit a batch of tar (which then goes thump, thump, thump in the fenders). We later met up with the group of Polish and Swiss. They were driving to China and then back via central Asia.

We crossed into the watershed of the Ð•Ð½Ð¹ÑÐµÐ¹ (since the Urals weâ€™ve been in the ÐžÐ±ÑŒ watershed) and at the next small town was a shop and place to fill up with water for the day. We found a place to camp across the road from town, hidden in some evergreen trees. Photo below shows an average number of mosquitoes on the rainfly with just a few horseflies. 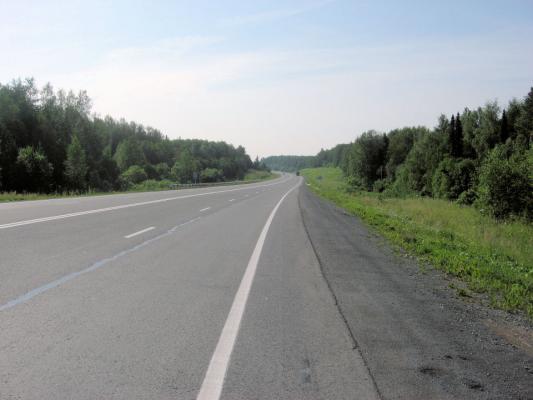 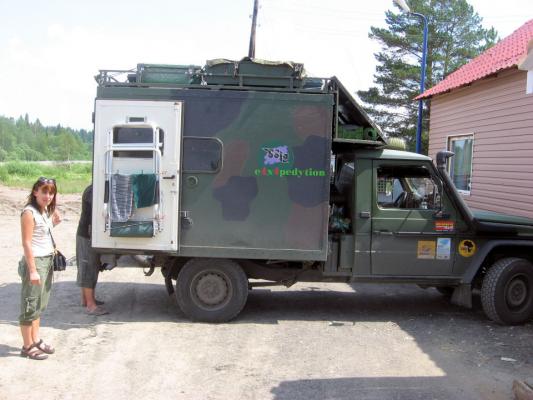 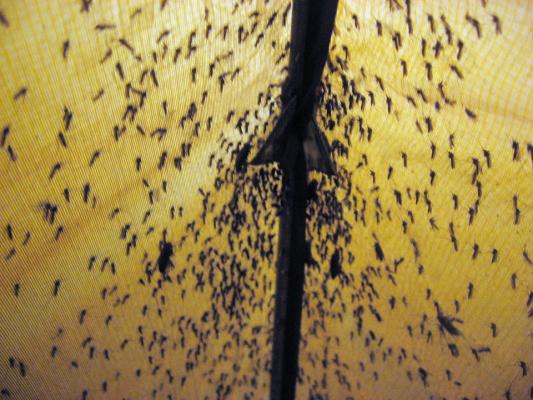