A lot of variety in todayâ€™s ride: farming areas, city and forests. Reasonable roads except for the last 30km. Iâ€™ve been adjusting my alarm a few minutes each day to avoid having a big jump at the time zone boundaries. The sun was still low on the horizon as I awoke.

The first 28km to outskirts of ÐšÐ°Ð½ÑÐº were through farming areas. We had steep hills between 9km and 15km and otherwise flat. It was misty out and I kept thinking these bad roads and fog do not mix well. Fortunately, more traffic was heading the other way. Our first cafe had several youths outside drinking alcohol. We watched our bikes a little extra carefully because of this.

ÐšÐ°Ð½ÑÐº was a bigger town than expected and also very confusing. In all it took 22km to cross. The signs for the main road brought us into the central square and from there it was tough to find our way out. At one confusing point, I looked up and Mickey was gone. Fortunately, we had had a similar idea: get to the edge of town and meet up. On east edge of town were some slow hills to climb. We climbed up and over a ridge. On the other side, more cycling through forest where we found a cafe at turnoff to Ð˜Ð»Ð°Ð½ÑÐºÐ¸Ð¹ at 65km.

After our lunch, clouds were threatening. We cycled along and got a few drops but the main clouds missed us. Around 82km we crossed the railroad tracks. Here the roads became much worse with several large gaps in the pavement. Cars would slalom through the remaining pavement. Pavement was marginal as we came through two â€œshoestringâ€ towns of Ð’ÐµÑ€Ñ…. Ð˜Ð½Ð³Ð°Ñˆ and ÐÐ¸Ð¶ Ð˜Ð½Ð³Ð°Ñˆ. We stopped outside a deli at 95km and made plans for the ride.

The idea was to cycle 10km, find water and stop. The first part of cycling 10km went fine. However, we were in forest without a village. The road surface also became a lot worse. Sometimes it was crumbled concrete road, sometimes large potholes and sometimes little pavement. Fortunately, traffic was light so one could usually slalom to find a place to ride. We rode into Ð¢Ð¸Ð½Ñ‹ to get water and then circled back to camp in the forest. Our last two nights weâ€™ve had fewer insects but they are at full strength here. We will see if these poor crumbled roads are a sign of things to come. 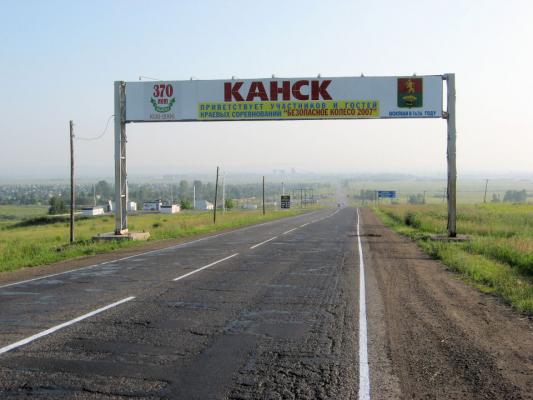 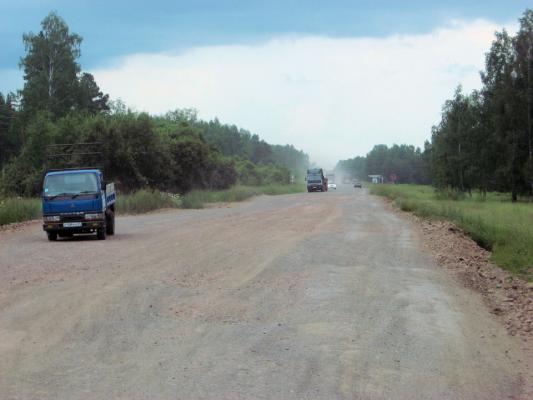 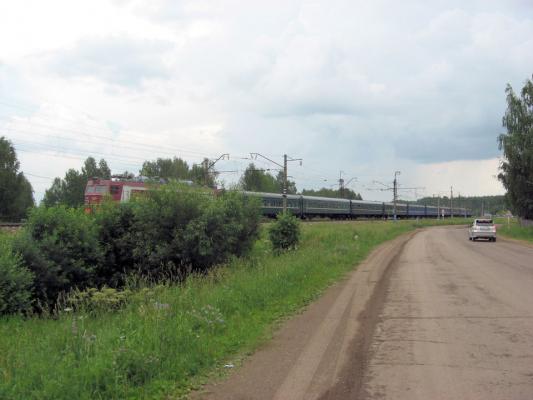