A good day of riding today as we had many hills but reasonable roads. We passed through several smaller towns and one somewhat larger: ÐÐ¸Ð¶Ð½ÐµÑƒÐ´Ð¸Ð½ÑÐº. The latter resembled the dusty frontier town in Star Wars.

It was cool again this morning as I left. A nice quiet ride of 11km brought me to Ð£Ðº. I was eating a candy bar as two hitchhikers came up. They were from St Petersburg and Tatarstan and were on a two week trip to Mongolia and China.

There were more hills to climb on way to ÐÐ¸Ð¶Ð½ÐµÑƒÐ´Ð¸Ð½ÑÐº, with many purple flowers along the way. At 31km we descended into the clouds and then fog. Here at a railroad crossing I saw the hitchhikers again. They had gotten a ride, but then the car had run out of gas. A few kilometers later we came to city limits and the asphalt ended into a dusty gravel. I rode a little to find a store. A drunk yelled at me and when I stopped at a nearby store, he stumbled over. I mostly ignored him and bought food for the day. Mickey caught up here and we then rode together through town, crossing the wide Ð£Ð´Ð° river. We kept dodging potholes as we looked for a cafe to stop. The first looked dodgy and the second had a fleet of taxis at outskirts of town. Two taxi drivers came over. In a difficult conversation we understood that the next cafe was 5km out of town. We were happy to see this appear at 47km.

From here the road was in fair condition as it crossed drainages and had some long slow hills. At 80km we had road construction. After a few kilometers this diverted us into Ð¥ÑƒÐ´Ð¾ÐµÐ»Ð°Ð½ÑÐºÐ¾Ðµ. It was a long narrow town where I found Mickey outside the store at 88km explaining the trip to a group of Russian women. A short bit later we stopped and got water from people working on a school The road became better as we rode out of town and found a place to camp. 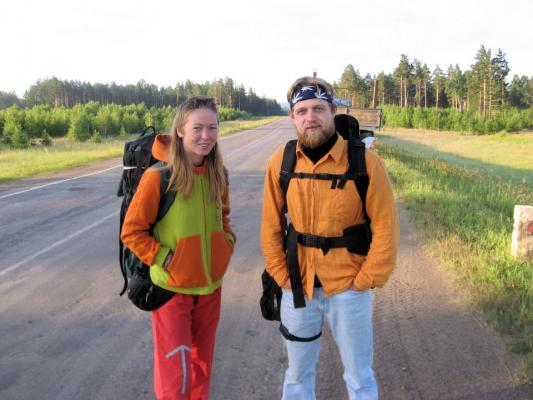 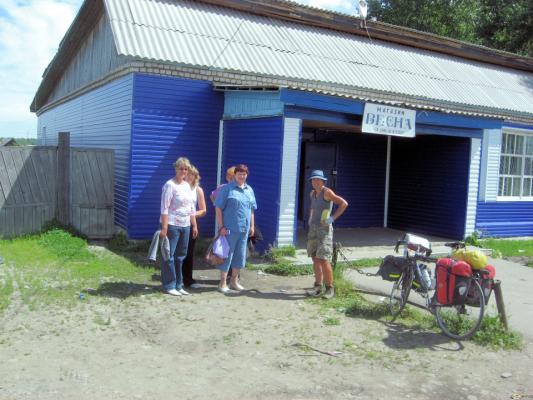