Today was a tough day of climbing. We had two long climbs of multiple kilometers and very little of the other roads were flat. It was still nice to make it all the way to Baikal.

The hostel had new guests yesterday. One common pattern amongst these guests seems to be that they take train from Moscow (4 days) and then rest in Baikal at Okhlon Island before continuing on to spend time in Mongolia and China. I was surprised at how many had similar itineraries.

We were up early and had breakfast in the hostel. We retrieved our bikes from nearby car parking and packed everything up. We cycled across the bridge, past the railway station and then south through Irkutsk. The hills started here. At 10km we saw signs for M55 highway â€“ counting one side the distance from Irkutsk and the other the distance from Chita. We had some small hills on way to Ð¨ÐµÐ»ÐµÑ…Ð¾Ð² at 25km. I tried to take a photo and noticed that the outside shutters to my camera were jammed shut or open. Will need to see if it still takes ok pictures.

At 35km we came to Ð§Ð¸ÑÑ‚Ñ‹Ðµ ÐšÐ»ÑŽÑ‡Ð¸ and our first long climb. I was fresh and so put things in low gear and powered up the climb. It was still nice to stop at ÐœÐ¾Ñ‚Ñ‹ at 50km and refuel. After ÐœÐ¾Ñ‚Ñ‹ we started our second long climb and I was less fresh. Several local cyclists were using the hill for training. We met one in the photo below. He was a member of the Russian speed skating team and competed in Turin Winter Olympics in the 3km/5km races [by the way, anyone recognize this speed skater?]. He was using the hill for cross training on his bicycle. Needless to say, these cyclists were quicker to climb than we with our full gear. The steepest part of the hill was 6km long, but after that there was a relentless series of little ups and downs. By the time I reached Ð“Ð»ÑƒÐ±Ð¾ÐºÐ°Ñ at 76km I was thoroughly exhausted. The food stop here was welcome.

Fortunately, after this there were fewer long climbs and more ups and downs. At 79km road construction started. We had 5km of smooth roads and then 6km of gravel. Most of the gravel was downhill. At 91km we could see Baikal below in the distance. Rather than descent, the road climbed up another hill. This was the last big hill and we started to descend to the lake. We stopped at the overlook and then down to ÐšÑƒÐ»Ñ‚ÑƒÐº. We found a place to camp in a pasture where cows were roaming. Fortunately the cows went away and there werenâ€™t too many patties nearby. It is nice to now hear a new sound: that of boats in the distance in addition to trains and road noise. 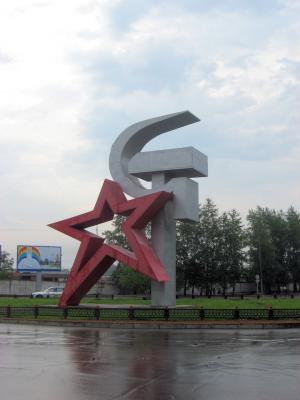 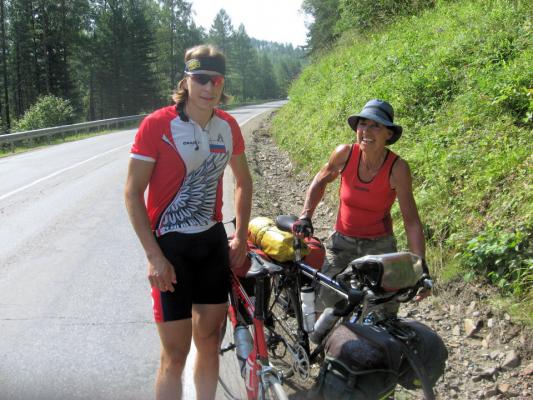 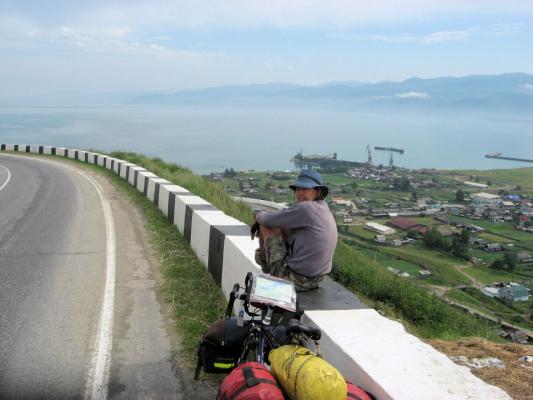