Sunrise over Baikal. The water was calm and it was slightly cool as I left. I carefully carried my bike over the tracks as the line was very active last night, particularly between 4am and 5am. We were camped close to the tracks so would hear a loud thunder of trains as they passed.

The road started with many small hills. Again, I would switch to low gear, slowly climb the hill, descend and do it again. In hindsight, we had picked one of the better Baikal campsites as after this see saw less of the lake. At 16km I came through Ð‘Ð¾ÑÑ€ÑÐºÐ°Ñ and after this the road became flatter and curved more inland. At 38km was a side road to the Selenga River delta and some more hills. The cafe at 42km was unfortunately closed. Hence, I kept cycling to 51km where I saw many vendors of fruit, potatoes and fish along the road. I bought and ate fresh raspberries and also sour cherries.

I was surprised Mickey hadnâ€™t caught up with me yet. So I waited. Eventually she came. Her freewheel had started making a horrible racket, tick, tick, tick, particularly when it would spin free down a hill. It seemed to keep riding and became a little less loud, so she kept riding slowly.

We cycled on to 62km and had lunch at a small gas station beyond ÐšÐ°Ð¼ÐµÐ½ÑÐº. The terrain became much flatter here but it also became warm with a slight headwind. We kept riding through small delta towns and at 98km turned into Ð®Ð³Ð¾Ð²Ð¾. The girls in the photo below were friendly (but gigglely) but otherwise this was an unfriendly town. The store clerk was exceptionally surly/impatient. There were a set of juvenile delinquents hanging outside the store causing trouble. As they started whining about money, we became more strict with them. We also decided to cycle a ways out of town. Just as we left, Mickey had a flat rear tire. We pumped it up and fixed it down the road. We found a reasonable place to camp after that. 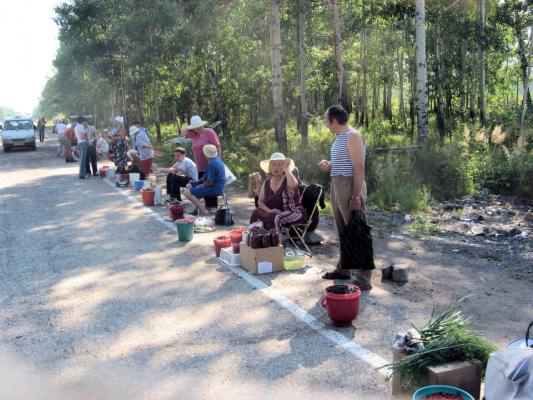 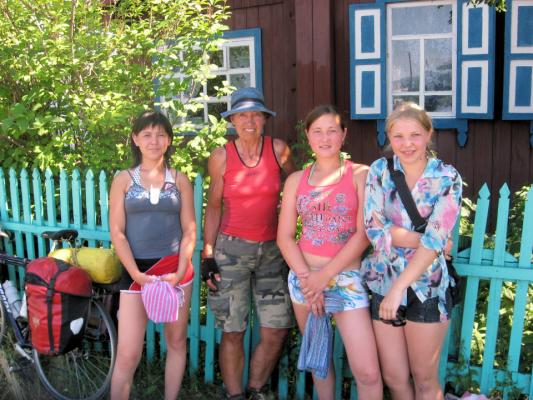