A lot of climbing today, particularly since the last two thirds of the day followed a river valley. It was overcast and misty when I started out. I rode slowly and stopped to clear my glasses a few times. At 5km was a turnoff to ÐŸÐµÑ‚Ñ€Ð¾Ð²ÑÐº-Ð—Ð°Ð±Ð°Ð¹ÐºÐ°Ð»ÑŒÑÐºÐ¸Ð¹. After this a few kilometers of climb. I climbed out of the mist and could see clouds in the valleys below. However, the road then descended back into the mist. At 16km was a cafe at the second entrance to ÐŸÐµÑ‚Ñ€Ð¾Ð²ÑÐº-Ð—Ð°Ð±Ð°Ð¹ÐºÐ°Ð»ÑŒÑÐºÐ¸Ð¹. We crossed the railroad tracks and had a few more ups and downs. At 30km came a nice looking building on the left. It looked like a Buddhist prayer center with a spring and also a cafe. We had a good breakfast at the tables outside. The road continued with ups and downs as we passed two other towns. They seem to have placed the road on edge of the valley and hence it crosses many of these small hills on the sides.

At 43km we started a more serious climb with a long moderately steep stretch of perhaps 10km. It was getting warm and hence I was extra slow. I finally reached the top and had just as steep of a downhill. Fortunately at 60km I saw a â€œcafe 20kmâ€ sign.

After the last 3km of descent, my goal was to reach that cafe which seemed to line up with Ð¥Ð¾Ñ‚Ð¾Ñ‚ÑƒÐ¹ on my map. There were a few more steep hills and then it finally became flatter. The road also got closer to the train tracks. When I reached Ð¥Ð¾Ñ‚Ð¾Ñ‚ÑƒÐ¹, there was a â€œcafe 1kmâ€ sign pointing to the village. Mickey had taped a note saying she had gone into the village in search of food. I followed. I asked a few times and was told the cafe was up on top of the hill on the main road, along with a female cyclist. I returned back to the main road and saw cafe and Mickey about the same time.

From here we cycled the next 20km to Ð‘Ð°Ð´Ð°. There were gentle ups and downs and a headwind. On the hillsides were some forest fires. A wedding party passed us with decorated cars. A different visibly drunk driver stopped his car and stumbled to greet us. We bade him farewell. At 105km we turned into Ð‘Ð°Ð´Ð°, found a shop, filled up on water and then cycled back out of town. With dry conditions and forest fires nearby, we camped in more open areas with smaller trees. Some cows wandered by but we scared them from being too curious. 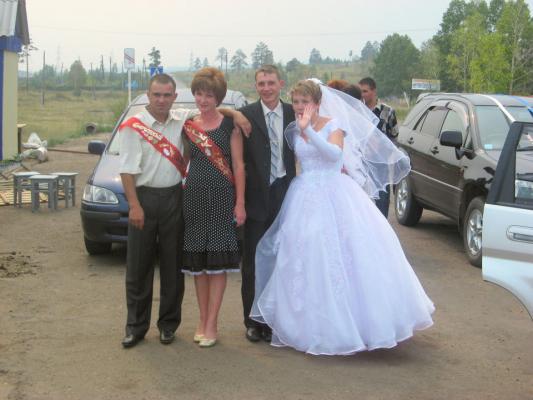