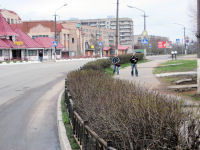 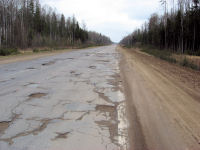 Made it to Russia! The hardest part about crossing the border was finding it. My hotel was close to the border, so cycled inbound and followed the signs. The border station signs pointed to an area with rows of large trucks waiting. This didn’t seem right so I kept going and it looked less and less like the border. Finally, asked someone and from his Russian explaination I could get enough to know: back to the traffic circle and left. Cycled back and found spot for normal cars and also for pedestrians. Saw another bicycle use the pedestrian path, so followed.

I walked up to the Estonian exit, had my passport stamped and wheeled the bicycle through. After exiting Estonia, there was a place to change my Kroon to Rubles, so no more Estonian money. From here the pedestrian path went downhill and across the bridge. Crossing the bridge was a neat view with large old fortifications on each side: one flying the Estonian flag and one flying the Russian flag. Decided not to take photos since I’m never quite sure what is allowed.

On the Russian side of the river was a similar border control building. I followed other pedestrians in. There was a sign with customs. A helpful lady gave me a migration card and helped me fill in the right blanks. The passport was stamped and that was it! I wheeled my bicycle out the building and walked for a bit along the fence separating pedestrians from automobiles and eventually had the first photo of Ivangorod (Ð˜Ð²Ð°Ð½Ð³Ð¾Ñ€Ð¾Ð´) and start of the M11 motorway.

Stopped at the first gasoline station to buy a map and was soon on my way on the motorway. This road was surprisingly quiet and surprisingly variable as far as road conditions go. Some very nice smooth places and also some areas near Kingisepp (ÐšÐ¸Ð½Ð³Ð¸ÑÐµÐ¿Ð¿) where it was just one pothole after another. I tried different techniques: slowing way down, riding the shoulder, walking the worst bits, cycling on the other side of the road but it was all pretty slow going. Fortunately at 30km after Kingisepp the motorway was generally better condition. 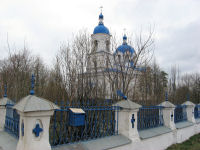 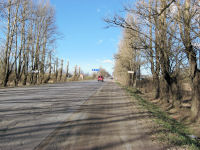 At 44km was a big orthodox church and turnoff to the smaller P-38 road. With some email help from helpful folks at ExperiencePlus I had identified a hotel in Gatchina (Ð“Ð°Ñ‚Ñ‡Ð¸Ð½Ð°) that seemed like a useful destination. (ExperiencePlus has run a trip as part of their Expedition Plusseries from St. Petersburg to Istanbul. If you want to do the same ride I did today but in reverse and without baggage see their trip).

The quiet road really started out quiet and in reasonable shape. It was variable in parts – where the road would be marked as bumpy for 1 or 2 or 2.8 or 5.5 or 6km and then better after that. Seemed like there were some gradual climbs but overall quite flat. Some forests but mostly wide fields, some with tractors preparing the fields for planting.

It was nice traveling along this side road. Every 10km or so, would be a small village, some with stores or large concrete block apartments, others with just little houses. Stopped briefly on other side of Volosovo (Ð’Ð¾Ð»Ð¾ÑÐ¾Ð²Ð¾) for candy bar and a coke and kept going. The rough spots kept my overall speed down and there wasn’t much wind so it was a slow steady slog. Finally at 116km, came across the main ring road and then just another 7km to the line of Gatchina (Ð“Ð°Ñ‚Ñ‡Ð¸Ð½Ð°) . Hooray!, I had arrived. It was a few kilometers of mixed walking and riding and I found my way to the hotel.

The hotel only had room for one night, but they called to other hotel in town and made a reservation for two more nights. Place is to take some easy rest days here before going into the big city on a Sunday morning. Apparently no internet in the hotel, so will see what chance I have to update things.