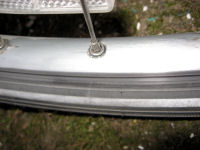 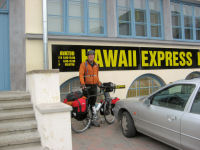 Today I must have followed a rain cloud into Narva. However, not long after I’ve arrived the cloud moved on and it is sunny with few clouds. The day started out a little slow, since I wanted to check into these cracks developing in the front wheel. As you can see from the photo, it doesn’t look like much, but enough to make me nervous longer term. I left the hostel and wandered through town, stopping at 8am when supermarket opened to get breakfast.

Next to HAWAII EXPRESS bicycle shop. Their sign said they opened at 9am, but I tried the door and found someone at 8:30am. They had a nice deep wheel double wall rim. We replaced my current front rim with a new one. I also refreshed the brake pads in front. It all went fairly quickly and smoothly and didn’t take long before I was ready to roll again. The new rim rides well, though I notice it needs to be trued a little more for up/down bounce. Owners were helpful, even answering my questions of why “Hawaii” when that was exactly 12 time zones away.

Next, I found my way to the newspaper office and got a copy of todays Rakevere Newspaper, that had my article (see below). After all that, was finally ready to leave town. I missed the turn, but eventually found my way out of town. 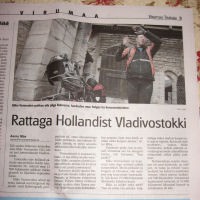 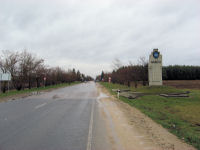 Skies were overcast and on the verge of drizzle as I cycled out of town.Â  They became wetter after that.Â  Fortunately, the road was smooth and I had a tailwind.Â  At 30km, I changed my water-repellent windbreaker for my rain jacket.Â  Now it was raining more steadily, so it just became a “heads down keep riding steadily” exercise without much stopping.Â  What I did see of the area was mostly open fields with a few slight hills of glacial deposits.

At 68km, I passed Jarve, and stopped at gas station for lunch.Â  My top had been keeping warm under the rain jacket, but my legs now also got a chance to warm up.Â  I could put on thermal underwear but found in the ride from Kaliningrad that this would mean two layers to get wet.Â  After a warming lunch, it took some willpower to get back on the bike and into the rain.Â  However, I wanted to try getting to Narva since that would give me some more options in following days and I wasn’t certain what weather might do.Â  The roads were a little rougher near Jarve but then became better as I passed Johvi near 80km.Â  At 96km was Sillamae which seemed to have a major sea terminal and many businesses.Â  The truck traffic became lighter as I climbed over what much be one of few hills at 102km into Sinimae.

The rain let up some as I got close to Narva, though the roads were wet enough that passing traffic still gave a spray.Â  Saw the turn off that split between border crossing and center of town.Â  Found a hotel not far from here.Â  I’ve definitely passed into a town where Russian is the preferred second language and English isn’t as common.Â  I’ve now got four days to ride from here to St Petersburg.Â  I’ll try picking the best day weather wise to get to Gatchina and then ride from there into the city on the last day.

Google maps are back to showing high resolution photos, so I can pinpoint the building for the hotel.Â  You can also see the tendency to have large concrete apartment blocks in these cities.