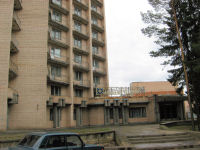 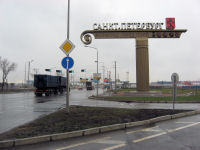 Big flakes of snow coming down outside. This sight caused me to pause slightly before setting off this morning. Fortunately, the worst of the snow flurries was past and it was only freezing rain as I left the hotel. St Petersburg has a reputation as a chaotic city to cycle and hence my plan to enter the city on a Sunday morning. Both the road conditions and the traffic were pleasant surprises and it was all easier than a similar sized city elsewhere (e.g. Sydney, Australia).

After 4km, came to the main highway coming from Pskov. The road was essentially a lane and a half wide on each side. This meant trucks and buses could usually give plenty of room though occasionally two (or three!) would try to pass each other. There was a slight upgrade and a headwind so wasn’t going very fast. Looked like mostly open countryside with fortunately some trees to shelter from the winds. The rain showers were intermittent though the road was still wet enough that spray from passing trucks kept things wet. 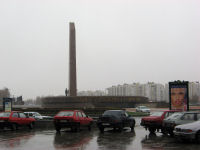 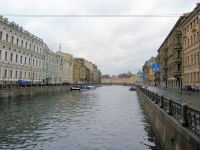 At 22km, I saw the official city limits sign to St Petersburg! There was a motel not much further and 6km further I passed the airport. At this point the road became a divided expressway with four lanes of traffic each way. Traffic was light, so gave me plenty of room on the right. I also noticed that the road striping was most worn in the left lanes so perhaps also a natural tendency to go into the fast lanes.

At 35km, I came past a big traffic circle at ÐŸÐ»Ð¾ÑˆÐ°Ð»ÑŒ ÐŸÐ¾Ð±ÐµÐ´Ñ‹. There was a big supermarket here and internet cafe and this generally seemed to start the built up areas. The rain started coming down harder so took the photo at left from a distance as I took shelter underneath eaves of the building. I figured I could walk from here but kept riding since road was still good and I didn’t want to cool down too much. The right lane was used for buses and minibuses to pick up passengers so we would weave into each other. Nearby was Moscow Metro station, the first of seven I would pass. A slow steady ride as I came closer to center of the city and passed four canals. From here I found my home stay location and met my host. Plan is to be here for three weeks learning more Russian language. I don’t expect to make daily posts until I start cycling again. After that they will likely also be posted less frequently as camp a bit more as Mickey and I cycle together from here and as distances between towns increases.