Weekend was a time to be a tourist more than a student. Though I did spend some time reviewing my vocabulary and grammar from the first week and also reading Dostoevsky (in English). 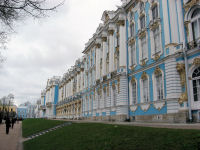 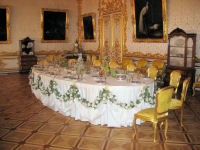 The school organized a trip to Tsarskoe Selo (Ð¦Ð°Ñ€ÑÐºÐ¾Ðµ ÑÐµÐ»Ð¾) in town of Pushkin, 25km south of St Petersburg, and site of the huge Catherine Palace created under direction of Empresses Elizabeth and Catherine the Great. This was a summer estate of the Tsars. The palace was surprisingly large and ornate with rooms designed and completed in different periods. The entire palace had been gutted at end of World War Two and most rooms restored hence including the famous â€œamber roomâ€ with walls all covered in amber stone. Each of the rooms were almost museum exhibits amongst themselves with large tile fireplaces in one, paintings in others and dining areas in yet others. Tourists were required to put on shoe covers. Mine barely fit which the guide somehow found surprisingly funny. It was packed with tourists. We went with guide from school who knows a lot about all these places and does the tour in English but then weâ€™ll have side conversations in Russian. 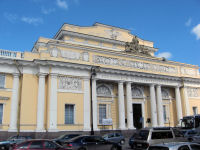 We met at the Moskovskaya Metro station and took a small bus round trip to Pushkin. Afterwards I got lunch around Moskovskaya Ploshad and then took the metro back to the center of the city. Still had enough time for another museum and hence found my way to the Museum of Ethnography. This museum had displays about different ethnic groups who lived in the former Soviet Union with many traditional costumes, farm implements and other tools and many photographs. It was interesting to see of the areas I would cycle through what different groups might be found (seems like still mostly Russian but occasional other groups e.g. Tatar areas or Buryat areas. One area chart had a list of oblasts and in each oblast the ethnic mix. It was an interesting mix to see the different peoples.