No school on May 1st for the International Labor Day holiday. I took the opportunity to wander through town and see how the city celebrated the holiday. A large part of the plaza was blocked off in front of the Hermitage and all of Nevsky Prospect was closed with soldiers posted about every ten feet. I wandered along the parade route before seeing and hearing the groups marching down the street with small bands in front. My perception was of a large parade group followed by a small gap and then demonstration march. The parade consisted almost entirely of people walking (as opposed to US parades with many vehicles and floats).

The parade group was mostly different groups of people marching along with banners and flags such as in the first and second photos. The flags and signs seemed to be either political organizations or for different regions (or schools) around the city. I didn’t notice many strong political messages other than one group (third photo from left) with their “Estonia disgrace of Europe” banners presumably referring to recent situation in Tallinn where the government, after much unrest, has decided to relocate a memorial commemorating Soviet army sacrifice/victories in the Second World War.

After the main parade group was a gap. It felt tenser as I noticed a few police in riot gear and decided to walk away from the immediate area and down the street. The second group was primarily the Communist Party and different nationalistic or ethnic “Russian for Slavs” right wing groups. Many red hammer and sickle banners but also a small Che Guevara contingent and groups carrying photos of Lenin or the leader of Belarus. There was more of a political demonstration feel to this latter march group with chants, banners and people handing out leaflets, as well as soldiers marching along to prevent conflicts from erupting between protesters and counter-protesters. The fourth photo has initials Communist Party Russian Federation (КПРФ) and banners promoting a Russia/Byelorussia communist federation. 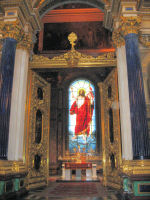 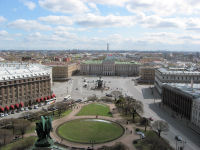 After the parade, lunch and then time to wander through town. The Russian Museum was closed on Tuesdays and the lines at the Hermitage were long so wandered mostly through town and took opportunity to visit nearby St Isaac’s Cathedral including climbing up the staircases to view over the city. The massive church was built between 1818 and 1858. From above, I had some nice views of the city. Otherwise, many people out and about enjoying the sunshine which was a nice change from yesterday’s snowfall.