↓
Home→European Russia→Ð§Ð°ÐµÐ²Ð¾, waiting out some rain and working through minor troubles

It rained. Last night a little and rained more this afternoon. The tent works fine, though would be claustrophobic for a long time. Iâ€™ve been getting up earlier each day, and so was up first on the road. This road even had some smooth parts!

The terrain today and other days has been flat with occasional villages every 5 to 10km. These arenâ€™t directly on the road but instead have a bus stop and a sign. Where it was smooth I rode quicker than with bumps. There are lots of trees, so somewhat relaxing riding.

At 64km, we stopped for lunch at a local truck stop, cafÃ© and store. It was surprising to see several large trucks with Dutch lettering and Russian license plates. Presumably, these were resold and not repainted?

After lunch, it started drizzling. We rode for another 11km and then found a bus stop to wait out the storm. The rain became lighter but then a little heavier. Finally, we decided to just ride for a bit and surprisingly it became lighter before stopping. At 93km we had our first small bicycle trouble. Mickey had hit a deep bump and her pannier fastener had broken. Fortunately she had another washer and was able to make the repair. Unfortunately, not much further her rear tire went. Sigh. We walked to next bus stop and made repairs. It seemed like time to end the day, so found the next village and found a place to fetch water before camping for the night. As we cycled the last bit, I noticed that my fender stay had broken. Looks like the pannier had banged into it enough to break the fender stay. In the evening, I removed the fender and stabilized the panniers. 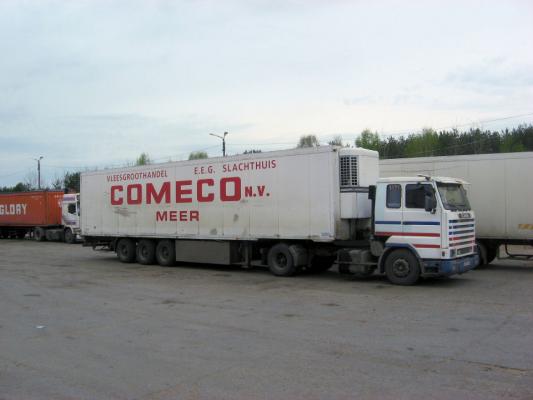 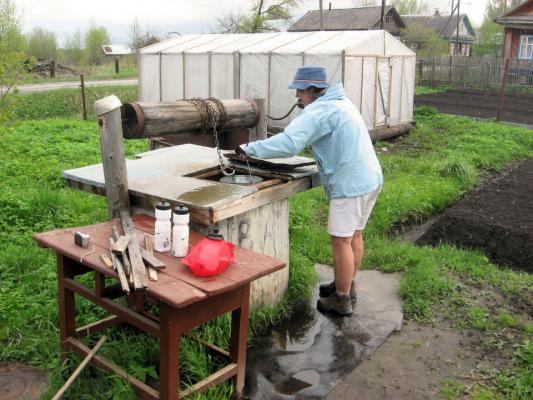