Today a ride into the big city and first night in a hotel. The roads were becoming busier as we came closer to the big city. Initially it was flat riding through the woods with just a few villages marked along the way. At 15km I was pleased to see a sign for a cafÃ© in 20km. So, kept riding slowly along to Ð¡ÑƒÐ´Ð° where there was another truck stop type place. A small store provided a yogurt and excuse to stop. The nearby cafÃ© somehow wasnâ€™t serving things, so continued the last bit to Ð§ÐµÑ€ÐµÐ¿Ð¾Ð²ÐµÑ†.

Turnoff to the city was at 52km. From here we headed southbound again. In distance were a large number of factories belching smoke. At least the wind was blowing away. Without too much difficulty we found center of the city. Now time to find a hotel. It took several times of asking, each time would get us a little closer to the destination. We were told about the Leningrad Hotel and hence headed there. We found it not much further than the stadium. However, it was both expensive and small. We were able to ask for another hotel and sent along our way.

We found the second hotel and initially it was even more expensive, but then the price suddenly dropped when they told us it would be cheaper â€œÐ²ÐµÐ· Ð³Ð¾Ñ€ÑÑ‡Ð¸Ð¹â€ (or something like that, I couldnâ€™t quite find things in the dictionary). The price seemed right so we took it. Later we figured out from context that hot water had been turned off. This wasnâ€™t a big deal for hot water heat but was a surprise on taking a shower.

We walked back through most of the town looking for a cafÃ© and then back to our hotel with stop in the supermarket. Along the way, found a â€œcomputer clubâ€ that was filled with adolescent boys playing computer games, but also had connections to the internet. We are likely to take a rest day here for a short breather from tough parts of riding the road. Plan is to post this on the rest day, though photos may have to wait. 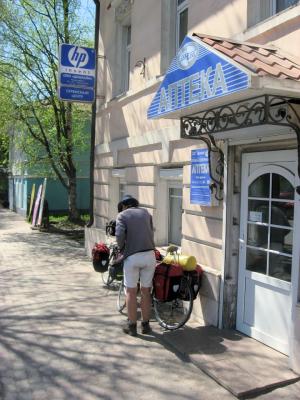 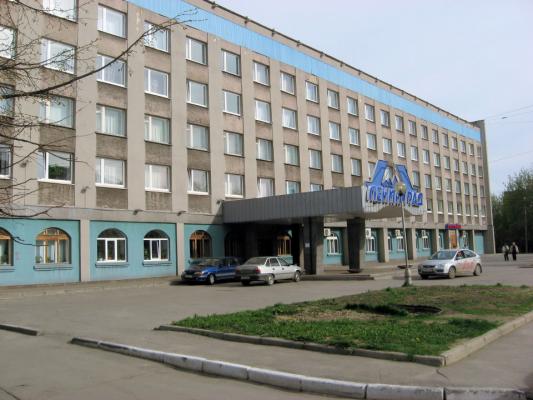