A surprisingly difficult day as we crossed two smaller Russian cities. The awkward part is directions that are not well marked. It isnâ€™t as tough to get into town as it is to get back out again.

Some mosquitoes in the morning kept things moving along. From freezing several nights ago, weâ€™ve switched to close to 30C during the days. The road from ÐŸÐ¸ÑÑ†Ð¾Ð²Ð¾ was fair and went through several nice small villages. By 28km we started into Ð˜Ð²Ð°Ð½Ð¾Ð²Ð¾. Initially the road wasnâ€™t bad as we found a supermarket at 33km and center of town 3km further. However, getting out was awkward and took several times of asking questions. Eventually we found ourselves to the outskirts to discover that we needed to still needed to head further south and to ÐšÐ¾Ñ…Ð¼Ð°. In comparison to other European towns, these seem to be tougher to get out of properly.

It was still busy for several kilometers into ÐšÐ¾Ñ…Ð¼Ð°. We were both hot and frustrated by this first town. Fortunately some cool shade and hot tea made things a bit easier. The next town was Ð¨ÑƒÑ and was smaller on the map. Rather than take the bypass, we elected to cross town again. Another good supermarket for food. As we cycled out, we were stopped by two reporters from a radio station. I was able to answer most of the simple questions (they are frequently similar about where we come from, are going to, etc). Iâ€™m not sure what the radio will have to say about our trip.

This town was again awkward to exit and road conditions were worse. Fortunately, finally made it to ÐŸÐ°Ð»ÐµÑ… at the end of the day. Some quick perceptions from cycling along:
– People in this part of Russia are both friendly and curious. Weâ€™re asked frequently where we are from, however people are also a little shy and donâ€™t barge in to ask.
– Weâ€™re seeing many more ruins of old churches here. This area has many agricultural villages, many with a church looking in some disrepair.
– Roads have become a little worse in this oblast. Weâ€™ll see what we have coming up. 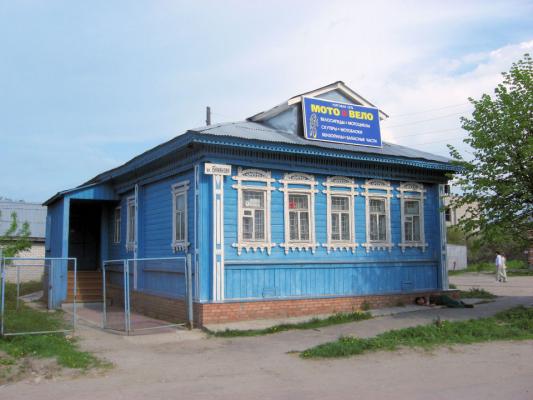