Where is one of the best places to be during a rainstorm? Twice today we had the good fortune of being in a cafÐ¹ during the rain. This is now being written in my tent with â€œthousands of biting insectsâ€ outside.

Today was a nice day of cycling with smooth roads. My tent was dry early so I got an early start. This area continues to have fallen in churches in the villages – a contrast with western Europe where they would have been restored. At ÐœÑ‹Ñ‚ was a small store. It seemed to be both a social center and place for goods with enough for 4 or 5 customers inside. Mickey caught up with me here.

From here some more quiet cycling with intermittent trees and intermittent bad roads until we came to ÐŸÐµÑÑ‚ÑÐºÐ¸ at 60km. We cycled through most of the town before finding a cafÐ¹ at the other end. Several Russians were interested in joining us at the table and recommended the kefir as better and less expensive than soft drinks. As we were eating, a big storm came through but fortunately we were able to bring the bicycles inside to wait out the storm. There also werenâ€™t hot dishes once the power went out. The Russian table mates did tell us of several potential hotels including one by ÐœÐ°Ð¼Ð°Ð›ÐµÐ½Ð° cafÐ¹.

We cycled our third segment past ÐÐ¾Ð²Ð¸Ð½ÐºÐ¸ and then south along the river. We were on the lookout for ÐœÐ°Ð¼Ð°Ð›ÐµÐ½Ð° and passed it the first time through. However, we had enough time to eat here and also wait out another storm. A little while later, the local mayor invited us to the town museum and also explained the hotel was in the town 4km away. We passed and found a place in the woods nearby. 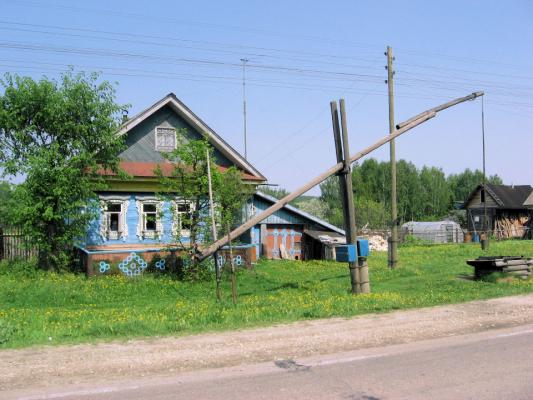