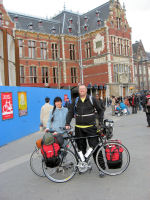 Reached Amsterdam! An easy rest day today before starting the trip. Photo at left is an official “start” photo taken outside the train station in Amsterdam.

An uneventful flight that was delayed by 60 minutes by weather in Chicago. Other flights had been delayed before, so our flight was completely full. Sitting behind me were folks from a tour group. They were going to see Amsterdam, Brussels, Paris and London…all in one week! Now just six days because they had been delayed by a day.

Luggage was slow to arrive, but bike and all gear arrived in good condition. At Amsterdam I was met by Mickey. Mickey is planning to cycle across Eurasia as well. Leaving Amsterdam a little later and then joining together from St Petersburg. We left bike in the box, and took the train and metro to Mickey’s place.

In the afternoon I put the bike together and we bicycled to my Oom (Uncle) Gerard. Along the way we took an official start photo shown above left. A nice meal in Amsterdam before turning in early for the night.