↓
Home→European Union→Netherlands→Out of the city, into the countryside to Olst 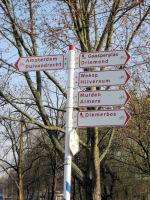 First day of cycling in Europe! Nice to finally be riding from Amsterdam on a trip titled “Amsterdam to Vladivostok”. My bike was visibly heavier than riding in Texas. I also noticed when the bike paths had square tiles, that the handling in the front was a bit bouncy. It was a little slower cycling today, despite absolutely flat terrain.

Left Amsterdam just past 9am. The first exercise was to find my way out of Amsterdam. I mostly tried different streets heading towards the east (into the sun) and also looked for signs to “Diemen” and “Weesp” since those towns were just east of the city. Cycling was still a little slow with the weight and occasional stops. At one point, I came past the “Amstel” train station and noticed I was a little too far to the south, so corrected to the north.

Outside Naarden, the bike path was suddenly closed due to construction. Just at this time a group of tourists came by on bikes with helmets and went on the road. So I followed. I took small roads to Laren and from here decided to take back roads through the countryside. The land was flat and open, but I also noticed the winds from the east. Weather forecast had called for winds of scale “4”, but I assume this beaufort scale. At noon, I had done just 45km and came to the Eems River. There was a ferry here and as you can see, the ferry was stopped until 13:00. Not much to do, but wait for an hour. 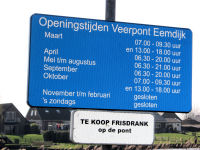 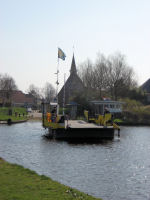 After the ferry was Eemdijk and then Spakenburg. More flat and sometimes windy terrain across to Nijkerk at 60km. From here, more trees and slightly faster cycling along smaller roads and bike paths to Harderwijk (82km). I was feeling the cycling already but came east to Nunspeet (98km) and then turned south through the Veluwe Forests. Some beautiful cycling here via Epe (110km). Here I accidentally got onto a larger road without a bike path. Despite the “caution bicycles” sign, several of the cars let me know with honks that they didn’t expect a bicycle.

From here a few small towns including Oene and then via Wilsum across another ferry. I wasn’t quite sure how long this one might be open so I kept going to reach it just before 6pm. Crossed the river and made my way to my Tante (Aunt) Gea. Nice end to the first day of cycling. I’ve decided to increase my estimated trip distance to 13000 km, since it may be a little further to St Petersburg than initial estimate. 123 km today. 1761 km total.