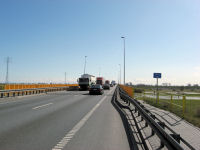 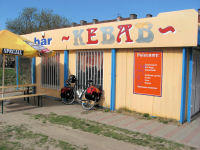 Small things. This morning I pumped up the back tire. Well, that sure made a difference. I was riding a bit faster through the day. Perhaps when things felt squishy yesterday, they were in fact squishy. Today was some nice fast flat highway riding and also small roads with hills.

I had a nice breakfast in the hotel. The proprieter was a bit amazed to have someone cycling from Amsterdam to Vladivostok, and shook my hand on the way out. The first 12km were challenging to say the least. Back to busy roads and then onto an expressway going through town. I mostly stayed on the main “7” through town, though in a few spots I tried side paths. There were several no bicycles signs, but I didn’t know other better routes and even saw another bicycle on one of them. I was slightly alarmed though in passing through one of these no bicycles to see several police coming with sirens blaring, but they passed and went somewhere else (and by then I had also quickly gotten onto walking along the sidewalk).

By 12km, reached the other edge of Gdansk and now onto the busy highway with shoulders. Some tailwinds helped me along for a fast ride. I stopped briefly for gas station snack at 26km. Photo at left is crossing the Wisla (Vistula) River at 32km. Even there the road stayed passable. There was some construction at Nowy Dwor Gdanski but nothing too bad. By 61km, I was at the turnoff for Elblag.
I walked and rode through town. Some broad boulevards, a nice flea market area and as I was heading past centrum, decided for some lunch. Saw the food place at right where the “Polecamy” sign seems to suggest hamburger. On ordering they quickly passed me to someone younger and bolder and I was able to ask “what do you have to eat”. She showed some soup packages, looked good and I had a good meal there. 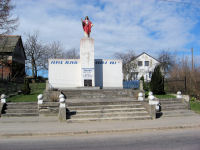 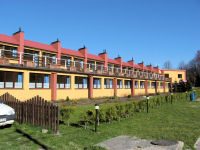 Not long thereafter, was on the small road heading up and out of town. The key word being “up” as it climbed gentle grades over the next bit. I shifted more to a crosswind, so also slower going.

This next road was variable. A few spots nice and smooth, but also among the roughest roads I had ridden so far. The cars seemed to be locals who knew where they were going and were driving fast. So, it was tough to pick the smooth parts of the road. It was slower riding with hills, but a little more scenic than the highway.

By about 92km, I saw the Baltic Sea off to the left. In a few kilometers I came to small seaside town of Frombork. It was still on the early side but the hotel at right was just too inviting to pass up. I almost did pass it up, but then also saw a “hill” sign heading out of town and that sealed the deal. Turned back dropped into the hotel.

Had some time to wander through town. The shops still open on Good Friday. I do notice that they still have better toilet paper here than the Russian type from later.

Tomorrow comes a decision point between a “Plan A” and a “Plan B”. My preferred plan is plan A to cross the border to Kaliningrad tomorrow and take Easter Sunday off as a rest day to see the city. The potential issue with this plan is that I noticed too late that Kaliningrad is one of those special cities with restrictions, so don’t know if my business visa will get me through the border.

If I am not allowed to cross the border, then plan B will be to cycle east for next few days to cross into Lithuania. Weather seems to suggest some tailwinds but also some rain on Sunday to Tuesday. Most shops will also be closed on Sunday and Monday. So will just see what choices pop out.