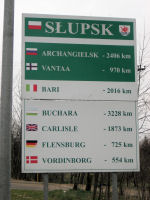 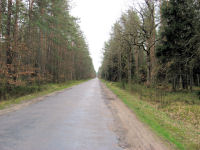 Small things. I had been missing my wool hat, and last night I found it amongst my clothing pannier. Good thing, since today I could use it well. We started the day with another continental breakfast. The person brought me the menu and I couldn’t make out much. After having a puzzled look on my face, he suggested choice #2, and it was a good choice. Eggs and also bread with toppings.

The weather was looking ugly, slight drizzle, cold and overcast. The saving grace was a strong tailwind. I had that tailwind for most of the day, though I’ve found I don’t go much fast, just get less tired during the day. Initially the route took me along the same highway and at 3km, started crossing Slupsk. This town wasn’t too hard to cross and soon I was back in the countryside. Before I knew it I was at a gasoline station at 25km. Here I decided to take the smaller “yellow” road rather than continue the expressway. While I liked my smooth road and shoulders, this route would hopefully get me better situated to pass Gdansk.

The quality of this small road varied widely. Some pretty smooth and some you really wondered what were the patches and what was the original road. Fortunately, the traffic was very light so I could usually pick the smoothest surface. It was nice to go through these little towns again. This area had a few more hills so occasional climbing and descents. My tires feel a bit squishy when I’m this loaded so I kept the speeds quite slow. By late morning I was through Czarna Dabrowka at 46km.

The next 23km to Sierakowice were nice cycling. Quiet roads and hills and farms to pass. I still had my wool hat and still had the nice tailwind. Sierakowice had more fruit sellers than other places, and a nice downtown. It was still early to come through at 70km. After this point, the road started getting a lot busier. Typically enough room to pass but traffic was occasionally bunching up. I climbed a large hill and then at 90km, came through Kartuzy. This would have been a fine stopping point, though didn’t see any hotels nearby. So, continued on through town and into Zulowo at 104km. 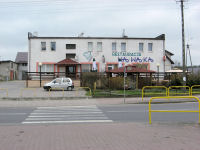 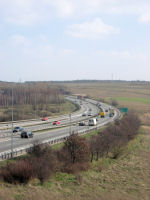 In Zulowo were two large rotaries as the major road 20 coming to Gdynia met up and this was also the start of road number 7 into Gdansk. Route 20 was entirely blocked up – with traffic at almost standstill. I never quite figured out why.

Road 7 was an adventure. No shoulders and a lot of traffic. Also in severl spots, the very right of the road had poor surfaces. So, I mostly cycled along and let traffic back up behind me. Most was pretty well behaved. After crossing the main E75 highway shown in photo, traffic was entirely blocked the other way. So, I cycled in my lane and let traffic go slow behind me. The car right behind was fine, though several back was a bus and the driver knew how to use his horn. There wasn’t much other choice, and I did pull over once or twice. I was happy though to see the “Green Hotel” up on the right. Nice contrast in different riding today.

It is nice to see that according to the Great Circle distance calculator, that I am now just as far from Amsterdam as from Saint Petersburg. Will see how the actual distances work out.