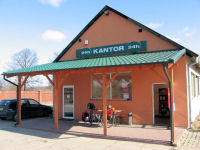 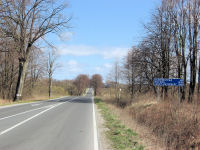 Made it to a little corner of Russia today, Kaliningrad. My plan A worked! Breakfast at the hotel was a little later. From there some smooth cycling for 10km to Braniewo and then north to Gronowo and the border. Just before the border were two establishments like the one on the left for exchanging money. I decided to exchange all my Polish Zloty and hope it worked out – if not I would go back the ATM and get more Polish money. From there at 17.5km was the border.

There were a few cars waiting so I took my turn in line. Waited for a little but then a customs official waved me to come up. They asked if I had a visa for Russia, “yes”, and then asked for the passport. Two different people looked at the passport and handed it over and told me all was ok. I looked back at my passport for any stamps – they noticed took it back and stamped the passport. I was then waved through and allowed to proceed. Hey, that wasn’t too difficult I thought before remembering actually all I had done was exit Poland, entry to Russia still remained.

I cycled forward to where a set of gates were down and the Russian guard told me to wait. I was asked purpose of my visit to Russia, “to bicycle across Russia to Vladivostok”. He then went back and to the telephone. After a little wait he came back and said, “you can’t cross the border on a bicycle”. Ok, so my question: “why?”. He let me know again that I couldn’t ride a bicycle across the border. I was just as insistent to ask why again and so he said, “wait and the officer will come”.

A short bit later, the officer came up in a car. He also asked my purpose in entering Russia. He carefully explained to me that you weren’t allowed to cross this border on a bicycle. Only automobiles, buses or their passengers could cross. He asked if I understood. Yes, I did but now I was really perplexed. If I couldn’t cycle across – then how to cross the border? The officer explained that I would need to get someone to take me across in a car. Ok, but where would I find such a car?

Somewhere in this exchange the situation changed from a “make sure the tourist understands the rules” to a problem solving exercise. Not quite sure how it happened, but once they knew that I understood the rules and wasn’t challenging them….the situation changed to one where they started helping to solve things. Fairly soon, the officer asked a minibus passing through if they might take me. It wasn’t exactly what the minibus driver wanted to do, but as he learned I was cycling all the way across Russia and even planned to go through Novosibirsk – his home city, he also became more enthusiastic.

We loaded my bike and all gear in the van. They passed me a migration card to complete. We drove onto the real passport control. We all got out of the van. After looking through passports, visas and everything, all was ok and we were allowed to pass! Hooray! A kilometer or two further was a gasoline station. The van driver parked. He joked that he could take me to Kaliningrad but wasn’t going to drive all the way to Vladivostok. Oh, no this was all fine and I would cycle from here. He wouldn’t accept money for the favor. He shook my hand and wished me well. I was pleased to now be in Russia! 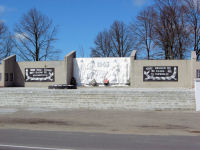 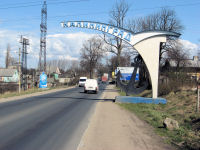 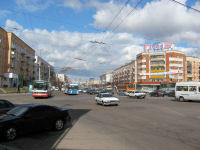 The sign said Kaliningrad 49km, and Saint Petersburg 1001km. Initially this road was very smooth and not much traffic at all. There wasn’t many crops in the field or cars on the road. The road came through several small villages and progressively became busier towards Kaliningrad.

I noticed several large monuments to “1945” and when this area was taken from the Germans. This area as a whole had been the Germany area of East Prussia and fierce fighting had occurred in this area. After the war, the Germans had been expelled and Koningsberg renamed Kaliningrad. The Cyrillic text was an obvious quick change as were new colors for road signs.

At 61km, I came to outskirts of Kaliningrad. I cycled for about 4 km further and then shifted to walking for a bit. I had made a hotel reservation via the internet. I didn’t see the obvious street. My “Lonely Planet Russia” also didn’t have several of the main streets that the hotel confirmation had included in their directions. Hmm, well decided to walk into center of town first and perhaps see if I could find a map along the way.

I walked to the center and the large (and expensive) Kaliningrad hotel. Ok, now time to start walking outbound. I decided to walk to less expensive hotel indicated in Lonely Planet. Along the way, found a vendor who had a city map. Great, looked things up and adjusted some to make my way to the hotel where I had reservations.

This is a large city of 400,000 people or so. Despite the outskirts being quiet, it becomes busy and chaotic in the downtown streets. I perhaps walked more than necessary but wanted to avoid crunching into a nasty pothole. I’ve decided to take tomorrow (Easter Sunday) as a rest day and explore a bit of the city. Internet at the hotel charges by the megabyte, so I haven’t put big photos in yet or updated geographic coordinates.

Despite the Cyrillic script, it is nice to be in a country where I know a little more of the language than I did in Poland. After 3000km of cycling, it is also nice to have my BikeRussia trip actually get into one little corner of Russia itself.

Now that I’ve cycled through let me also add a few observations on my quick cycling in Poland: (1) people are friendly and helpful, I could typically smile and have them explain a word or transaction (2) for parts I cycled through, German is much more prevalent than English (3) Polish roads are known for being among the least safe (as far as fatalities per mile) – I can see perhaps why. There is a lot of traffic and tries hard to pass into oncoming lanes. Roads with shoulders seem best but also useful to be alert as sometimes looked like a 3d Frogger game. At the same time, the small yellow roads can be beautiful, peaceful and quiet. Their quality varies widely but if I wanted to spend more time really seeing Poland, the yellow roads would probably be a better choice.