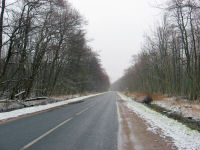 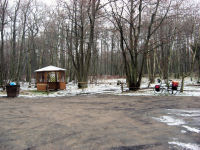 A wet and cold day as I came back into the EU. Woke up this morning to a light frosting of snow. While it changed to coming down as rain later, the snow on the ground stayed all the time I was cycling. Had a somewhat relaxed breakfast while anticipating the day ahead. Snow showers had mostly changed to rain as I cycled out of town. I was on the north end, so fairly quick on main roads heading north to Zelenogradsk. There was a bit of traffic, but this became far less as I came past turnoff to the airport at 14 km.

There were several small villages but mostly quieter roads after this. The rain was soft but steady so mostly heads down to continue cycling. At 29km, stopped at a Lukoil gasoline station for brief snack. I gave them my Kaliningrad map as I’ve been shedding some maps along the way rather than accumulate them. How far to the border? 50km.

This next part was cycling along the Curonian Spit, a narrow stretch of land and sand dunes approximately 100km in total length. Much of this looked like the photo at upper left, with occasional signs pointing to small paths to either coast, occasional roadside pull outs with tables and a few vacation settlements. The rain caused me to mostly get into slow and steady cycling mode to keep warm rather than stop and look too much. However, looked like an interesting wild and unspoiled area. I was surprised at how many trees I saw along the way.

By 79km, I was through the last of the towns and now onto the border. Curious what I would find here. Exiting Russia was more simple and straightforward than entering and they even let me ride my bicycle across the border. The Russian exit station consisted of four stops (1) first one they just wanted to know what passport I had, once I pulled it out – all was ok and sent me to next stop (2) second stop was customs, once they found out I was US someone came out and asked me in English if I had anything to declare, “no” (3) third stop was passport control, this took a bit and I had to take off my warm hat so they could compare me to my passport photo, then a lot of waiting before finally stamping my passport and handing it back (4) last stop was just a guard gate where they phoned back to make sure I was allowed to leave. Overall, quite simple and straightforward as border crossings go.

Now 300m further was the Lithuanian entry point. Just one stop where the guard came out, took my passport, looked at things and stamped them as good to go. Big signs welcomed me to the EU. I knew Lithuania had its own money but big question was quickly answered for me as I saw signs in Latin script rather than Cyrillic.

The border crossing had caused me to stop and hence feel a lot colder than I had gotten cycling along. I decided it would be better to stop at Nida rather than stay out in the rain too much longer. I took the turnoff and into town of Nida. First stop was the ATM to get money. Next, I went over to a big information area with an “i”. Helpful person there explained (in English) that it was holiday for second Easter Day. Stopped and had some food in the cafe and as I was going out to find a hotel, someone came over and asked if I needed a place to stay. Walked over to these small little cottages nearby. She brought her daughter over who understood more English and we quickly struck a deal. A little wandering through town, but mostly trying to get warmer here from a cold day of cycling.