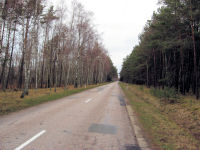 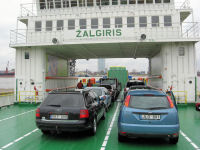 Today cycled much of the Lithuanian coast on the Baltic Sea. Quiet roads on the Curonian Spit and also some quiet bicycle paths north of Klaipeda. Awoke to cold overcast skies, but very happy to see it was dry. My bicycle made a few new noises after the wet, even after I stopped to oil the chain.

Without too much difficulty, found my way from Nida back to the main road. This road was surprisingly quiet and much of it looked like photo at left. Fairly flat, although a few hills as we neared the end of the spit. The area had signs for a nature preserve as well as indications to stay out of those areas. There was small town of Juodkrante at 30km and at this point the road switched over to follow the bay side. A few small hills and at 46km, I was at the ferry to Klaipeda. As we crossed, Klaipeda looked like a somewhat busy seaport with traffic.
I was still using my large scale Eastern Europe map, so mostly followed the road along the coast northbound. I thought I saw a green tourist information sign, but then passed without seeing it. That seemed to be a theme today as I saw several indications of those information areas in Palanga and Sventoji but at them found not more than an area map. Without too much difficulty, found my way onto 168 and heading north out of the city. Found a gas station here and bought a map of the Baltic States. This was quite useful since it showed the small roads along the coast to Palanga and beyond. 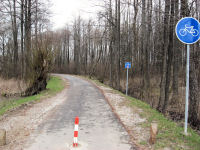 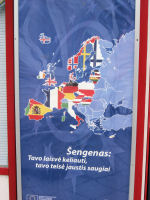 The small road went along a nature preserve area and had periodic boards with information and maps. It was once again a quiet peaceful road. At 64km, I came passed through Karkle and shortly thereafter came upon these route 10, bicycle path signs. That must correspond to the smallest size route on my map. This was nice peaceful route that brought me through the forest and into Palanga.

Palanga had several hotels, a nice town square and signs but no obvious information point. I did find some signs that had Palanga on one side and Sventoji on the other. What was promising were two things: several points of accommodation listed in Sventoji as well as indications this bicycle route 10 would continue along the way. So, I set off through town and on to Sventoji.

Reached Sventoji and it looked a bit like a ghost town. Several restaurants all looked closed. Their map showed that many of these accommodation points might be guest houses during tourist season. No real hotel or other obvious point. Asked one gentleman who could explain in Russian where to go further down the road. Also three youths with alcohol on their breath who explained they lived in the hotel and I could ask there. Nearby, not very obvious was a small door leading down to restaurant with hotel above. I asked, for 70 lit, found a very nice room and it was a deal. Seemed like a good place to stop since the next 60 km northbound didn’t seem to have much in way of towns. I’m not quite sure if Easter Tuesday is also a holiday but it is all very quiet here in Sventoji. Also no indication of wireless internet, so will see.

I’ve only seen a small piece of Lithuania, but several things became obvious on crossing the border and more today: (1) I’ve transitioned to place where the second language is English, not German. Throughout Poland, and even through Kaliningrad, seemed if you couldn’t communicate they would first see if you knew German. English seems a quicker choice here and also present on some signage. English is more prevalent with younger generation here and Russian with the older. (2) Change back to Latin script from Cyrillic is quick and obvious. This area seems to have more the the EU signs around as if pointing the future to rest of the EU rather than with Russia. (3) Reasonable roads, and surprising amounts of little bicycle paths in this particular area of the coast.