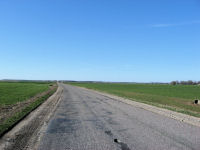 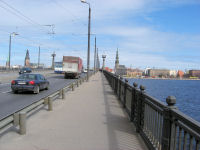 Riga is the largest city I cross between Amsterdam and St. Petersburg. It is also the capital of Latvia. Riga had over 900,000 inhabitants in 1991, but is now has a little over 700,000 as many of the ethnic Russians in the city moved elsewhere. However, I did see more signs of Cyrillic script along the way.

Left Dobele under bright sunshine and calm winds. After finding my way out of the city, through flat open farmland such as that shown at left. The first 14km, the road was a bit rough but got better on joining a larger road. At 21km, I was back to the A9 highway heading towards Riga. This road went through some more forest areas and had smoother stretches. However it was also busier and got a little busier as the morning went along. The kilometer markers started counting down to the end of the A9. Along the roads here even in rural areas are many small bus stops. The small villages might have a real shelter at the bus stop and the countryside just as a bench or even just the sign. What is useful is the bus stops also provide a small place for bus to pull away from traffic and hence also a cyclist to pull over to the side.

Made good time and by 59km I was to the end of the A9 highway. Now a choice to make of how to get into the big city. The main highway went left, so I followed A5 right instead. After 5km, I came to the smaller P132 road that went via Marupe. This was a little bumpier though also likely less busy. Another 5km brought me into Marupe and shortly thereafter to the city itself. In contrast to Polish cities, cycling into Riga was surprisingly easy as the pavement stayed in good working order. I cycled most of the distance but after coming to the large 1941-1945 war monument walked in further.

The war monument was one of the grandiose Soviet style monuments with three soldiers fighting, a statue of mother Russia and a tall column topped by several red army stars. There were 16 flagpoles (15 republics?) but no flags flying. Also not much else at the monument. From here I walked to the river and then across the bridge into the old city of Riga itself. Hooray, that wasn’t too hard. 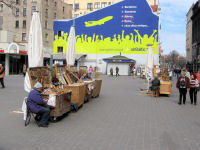 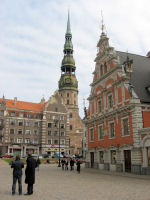 I went to find a hotel not too far from city center. The first one was quite expensive but could recommend me to something still pricy but less expensive. It was just before 2pm, so after a quick shower and change of clothes I had time to walk back to center of the city and do some walking around. The photo at left shows several street vendors selling amber. Apparently large amounts of amber is found in Kaliningrad area and smaller amounts in other parts of the Baltic States. The photo at right shows the old town square with nice historic buildings. 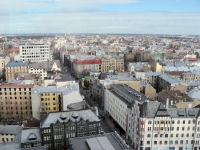 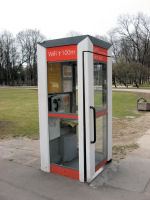 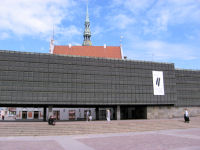 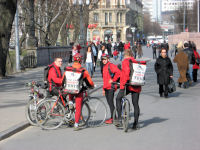 The next four photos shows an eclectic mix of different images from my wandering. First a nice city view to the east from above on the hotel.

Next, a pay telephone where the interesting feature seems to be that many of these city pay phones are marked as “wifi” phones. It seems that the Latvian telecom has turned pay phones into wireless access points. You can then buy cards to use that give a temporary user name and password and hence use wireless from within ~100m of these phones.

Next was the rather sober “Museum of National Occupation of Latvia”. This was right downtown and free with a donation. I spent some time walking through the carefully chronicled exhibits that showed the history of how in 1939 Latvia accepted Russian military bases, in June 1940 accepted Russian demands to replace its government and how that government a month later joined the Soviet Union. It showed how Latvian national institutions were broken down in 1940, the war years under German occupation and then the post-war years as Latvia was changed to be a Soviet Republic with the means of repression and camps used, as well as how national institutions, agriculture, religion and others were all shaped. It ended with a brief chronology of the end of the Soviet Union along with Latvian declaration of independence. Would be curious to see different perspectives on this history but this museum was strongly nationalistic Latvian.

The last photo shows a few bike messengers I saw on the street. Like messengers everywhere, they seem fearless as they dart amongst the city traffic. Quite a bit more nimble than I’ll be on my loaded touring bike.