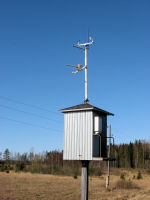 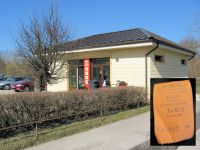 Weather keeps improving in the Baltics. Awoke to bright sunshine, though cool temperatures. Waiting until 8am to have breakfast as the cafe opened. It was about 160km along the main road to Riga, so wanted to get about half of that cycled today. The road was busier than south of Liepaja but otherwise quiet and good road. There were some gentle grades to go up and down but rarely anything to coast. I’ve passed several of these weather control boxes as on left along the road.

At 10km was Skrunda. I cycled along and before I knew it I was over the bridge and out of town. Occasional forests but also open lands. Saw sheep and open pasture areas. The wind was mostly from behind, so quiet peaceful cycling.

At 35km, came to the turnoff to Saldus. I took the turnoff to go into town as I expected it to be one of the largest places to go through today. Stopped in the center of town at 40km. Saldus had an old church dating back to 13th century. Also an active open market and a supermarket to fuel up on more food.

The photo at right shows the restroom (WC) in Saldus and also an interesting aspect in that you get little receipts here for everything. As you can see in the blown up inset, here is my carefully numbered receipt for Ls 0.15 for use of the toilet. I sometimes keep these little receipts but mostly find next places to throw them away. 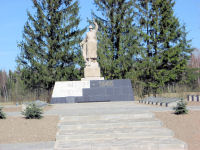 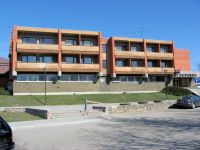 After Saldus it was back to the open road. I saw two of these World War II memorials such as shown at left. I found it curious that the end of the war was still denoted (1945) but no longer the start when Latvia was forceably joined into the Soviet Union. I also saw several concrete type bunkers so can imagine the front was in this area for a while.

At 65km, I passed the boundary from one region to another. There was still an older Soviet style marker but at least as useful was the large tourist boards. These showed no hotels in the next 95km on the main road. They did however, show a hotel in Dobele, 30 km further on: 16km on the main road, and 14km on a side road. So my destination was set.

The road became better in the new region. However, at 81km, even the smaller side road was a good condition. Without too much difficulty, found my way to center of town. Here I asked for location of the hotel. Turns out it was right around the corner. Dobele has a nice historic town square dating to 1495. One of the shops even sells bicycles and bicycle parts. There is a nice historic church.

I went out to nearby supermarket. The yogurt was from Latvia, the apples from Italy, carrots from the Netherlands and ice cream from Russia. I wonder how many of those trucks have been passing me on the road.

By the way: if a cyclist from St Petersburg is reading this (or someone has contacts in St Petersburg), let me know. I’ll be there for three weeks and will look for a good place to have the bike serviced and checked before continuing across Russia. Most of my time will be spent on Russian language studies, but would be nice to meet some St Petersburg cyclists as well.