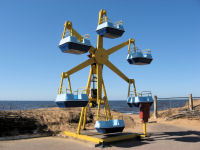 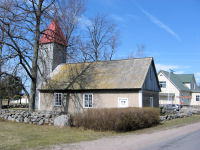 I passed a few boundaries today. There is the border of Estonia at 71km and also 2000km cycled in Europe. Sometime I also seem to have passed a religious boundary as the old churches I see are now Lutheran rather than Catholic. I followed the road along the coast. While I could occasionally see the Gulf of Riga, much of the time I was either cycling inland or hidden behind some trees.

Everyone at the guest house was still asleep as I awoke. So waited until 8am and then made some noises and they figured out how to let me out. Back to the dunes and back to the main road. First 10km, the road was occasionally rough but then I passed through a few construction zones and into an area with brand new road. The next 40km had very smooth new road. As shown below there were even newly built bus shelters. Traffic was very light as I cycled through the forest on the smooth quiet road.

At 51km, I came through Svetciems and here the road become older again. A few kilometers further and at 57km I was into Salacgriva where I had a lunch break at the big gas station. Another 13km was Ainazi. I had originally thought of this as my destination for the day. However, the motel at the turnoff looked uninviting and it was such a beautiful cycling day. So I decided to cross the border and see what I would find. It was an uneventful border crossing just a kilometer further. I asked the border guard where I might next find a cash machine to get money. Haademeeste or another 25km or so. The guard also suggested taking the old road.

The old road was marked as a cycling road and went along the coast. It was peaceful and quiet though a bit bumpy cycling along this road. Lots of trees and forests. In some of these areas I see evidence of logging, but also lots of untouched forests as well. I passed another hotel, but again wanted to see about getting money. Several of these settlements had old Lutheran churches. The houses also seem to occasionally be brightly painted. Finally at 96km came Haademeeste (the Estonian language seems to have a lot of doubled vowels some with double dots on top). I found my way to an ATM. I hadn’t quite looked up the exchange rate (~15 kroon per Euro, ~20 per dollar) so it was fun when the menu gives you choices…hmm how many to pick. I randomly picked some and was on my way. I somehow never quite found the guest house in Haademeeste, so decided to try the main road again and see where I next found a hotel. 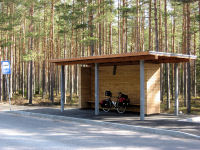 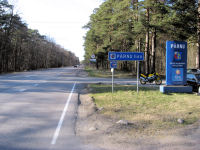 There were a few promising candidates as I cycled along, including a nice looking hotel at 114km. However, the sign seemed to indicate it was closed for renovation, so continued on. Went through a nice nature area at 104km that had several hiking trails. Road traffic was slowly getting busier but road was smooth with a 50cm border. I also stopped in at a gas station to buy a coke but at least as much to see how many kroon for a cola and get a sense of the exchange rate.

I passed through Voiste at 114km, Uulu at 125km and then a major road coming from the south. The road now became busier but I was also close enough so decided to continue and see what I found at Parnu. Once I passed the city limits, I took the local roads. I found a nice hotel just as a large bus full of tourists arrived. However, they still had room so I settled in after a long but nice day of cycling. I made my 7th border crossing today. After the 8th, I don’t expect many for a while.