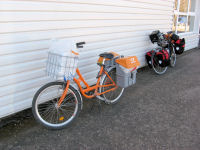 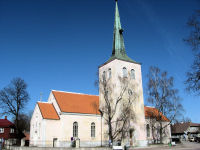 A nice ride into the middle of Estonia. I followed highway 5 which cuts across diagonally and heads towards Narva. The road was a little quieter than the main Tallinn/Riga road and occasionallyÂ  bumpy but overall a good road.

Had breakfast with the tour group at the hotel.Â  This was a buffet and so chance for other foods including some pickled herring that seems to be more common here.Â  I also notice some more exposure to Finland and a little more prevalence of the Euro than in other Baltic States.Â  After breakfast, packed the bike and headed off down the road.Â  It took a bit to find my way back out of Parnu, but the road rapidly became quieter after that.Â  Passed some open pasture lands and also some areas of forest.Â  The road seemed to bypass the centers of the smallest settlements so overall was fairly quick.Â  I made a brief stop at Selja at 26km then a more complete stop into Vandra at 47km.Â  Vandra was off the main road and had a hostel.Â  It also had a market where I stopped for early lunch foods.Â  From photo above left, looks like the Estonian postal bike and my touring bike have some similarities.

After lunch, more quiet cycling through the forest areas.Â  At 65km, came to a region boundary and after that some rougher chip seal.Â  The road stayed flat though detected some slight rises and dips.Â  Close to 80km, a short bike path in Sarevera and then into busier town of Turi.Â  Turi seemed to have a bit of town pride with bright yellow banners and a well maintained town center.Â  It was nice to slow down and walk through a bit of it.Â  From here the road became both busier and worse condition as it was the main road connecting Turi with the next town of Paide.

Came into Paide and went from bypass into center of town.Â  The hotel was located right next to the information area.Â  Nice central location gave me a chance to walk around some and see some of the town.Â  It surprises me how many large apartment buildings there are even in smaller towns such as this.Â  Otherwise, nice easy ride today.Â  I’ve got some extra time coming into Narva, though the weather also looks like a front will be moving through.