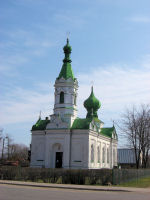 Add Estonia to the list of your next cycle vacations. I’ve always maintained that Newfoundland and Tasmania are two overlooked places for cycling vacations that really should be considered more often. I’ve only seen two and a half days of Estonia but what I’ve seen suggests this is a third place to add to that list. The roads are good and there are small cycle routes indicated that go along some of the back roads. I haven’t figured out Estonian but seem to get by ok with some English. There is long light in the summer.

I had breakfast at the hotel and then packed everything up. Today was planned as a short day, ~83km to Rakvere since after that places with hotels became less certain. Some smooth roads and tailwinds made for a good start. At 5km, I crossed the main road 2 from Tallinn to Tartu. From here traffic was light as I cycled through Roosna-Alliku and past Aravete without noticing too much.

Next big town was Tapa at 53km. I took small roads into Tapa. I may have passed another boundary as this was the first Orthodox church I saw. I parked outside the market and had lunch from the market. I’ve noticed that bananas in Estonia come from Panama. Outside a beggar approached, he asked me for something in Estonian. I wasn’t quite certain so just responded “Ne Eesti”. Surprisingly he responded in English with words “money” and “please”. I still didn’t give money but did think it was interesting that even the beggars here have a need to know some English as second language. 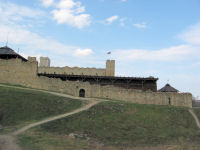 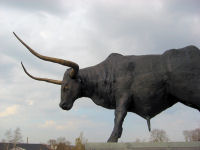 It took a little wandering out of town but soon back on the main road. As I was cycling along, another cyclist came alongside and we rode together. His name was something like “Indrek” (thank you below for help with the spelling). He was teacher, sometimes philosopher and also bicyclist. It was fun cycling along and learning a little more about things.

After multiple kilometers, Indrak asked if I wanted to see some other back areas. That seemed good. To the north is a large vacant polygon area where nobody lives that may have been used for Russian rocket practice. Seemed a bit too much to go, but as we came to the next road, Indrak mentioned that several beautiful little lakes could be found back there.

The sign said 2.8km, and seemed like an interesting adventure so off we went. The road was occasionally bumpy and surprisingly even steep in one or two places. It looked like an interesting glacial feature that indeed hid behind several different pretty lakes nestled into the forest. There were also these beautiful little purple flowers just starting to bloom.

We stopped once or twice to check the local information board about the area. Those boards and my map suggested we might be able to find back roads to Neeruti as well. With one wrong turn, we otherwise found our way to the town. Time to check the map and we found more back roads that would get us all the way to Rakvere. Fun! The adventure continued as we cycled along on quiet roads and had conversations about global warming and other issues. The kilometers went quickly. On the skyline overlooking Rakvere is a large castle. Was I interested in investigating? Sure, seemed like an extra bonus to the adventure. We found our way up to the castle but signs indicated it was open May to September and by appointment other times. However, another car pulled up and seemed that one of those appointments might be happening. So, after negotiating the price, we found ourselves on a guided tour of the castle.

This location dates back to the 6th century as a site for a castle with more recent history in 1200s and wars in early 1600s. I got the history somewhat mixed up (but more can be found here) but seemed to have been fought over by Russians, Swedes, Poles and others. After the 1600s had fallen into ruin until restoration in early 1900s and more recently in 1970s and 1980s. Several tourist oriented items could be found such as torture chamber, archery targets, shops and others.

After the tour we wandered around the castle. They then let me know that a local reporter was there and was curious to write a story about my travels. So, I gave the interview about my trip, where I was going and where I had been. It is supposed to be in tomorrow’s Rakvere paper so we’ll see (better response than I got by telling the Fort Collins Coloradoan).

The tour guide told us where to find an inexpensive hostel, and Indrak helped guide me here as well. Thanks, I certainly appreciated the extra hospitality and occasional Estonian translation help as two cyclists found their way around town. Made a short day a little nicer with some extra back roads explorations.

I did notice that my front rim has developed some cracks around the spoke holes. Not sure how long that has been going on, but I’ve also seen a good bicycle shop here in town so may investigate the two together tomorrow.