Today we continued following the old road past small settlements and into the larger town of ÐœÐ¾Ð³Ð¾Ñ‡Ð°. The road continued to occasionally be rough, though it was considerably flatter. This along with the lure of a hotel room at end of the day kept us going for further distance than before.

We continued the pattern of waking early and getting on the road. After 7km we passed ÐšÐ¸ÑÐ»Ñ‹Ð¹ ÐšÐ»ÑŽÑ‡. We hoped for store here, but didnâ€™t see one and it was also still early. We crossed under the tracks and continued to next town of Ð§Ð°Ð´Ð¾Ð½ÐºÐ° at 16km. We did find a store here, but it didnâ€™t open for an hour and a half. After this point, the road became a little rougher. It was hard to get lost here as the road very closely followed the tracks. I think we saw more trains today than automobiles. We waved at them and got train whistles back. The automobiles we did slowed down enough, so not much in the way of dust today. At 38km we briefly added a 4km extra ride since we thought there might be a store in ÐŸÐµÐ½ÑŒÐºÐ¾Ð²Ð°Ñ. After the initial report of a store here, the next two autos told us no, so we turned back.

At 56km we came upon a set of railroad workers. They had stopped, made a fire and cooked their lunch. They invited us to join them for tea. After this, we started to get closer to ÐœÐ¾Ð³Ð¾Ñ‡Ð° and had idea we might make it today. We kept riding slowly. At 67km we crossed the tracks again â€“ and we came upon asphalt. It was rough asphalt, but still smoother than gravel we had. The last few km it turned back to gravel. Bertâ€™s back rack broke here, so we had to adjust the panniers.

It was nice to make our way into ÐœÐ¾Ð³Ð¾Ñ‡Ð°. We stopped to visit both hotels and stopped in to make a reservation for two nights. Nice to make a stop here for two nights and recuperate after 432km of gravel roads so far. Bert has finished his ride and will take the train back to Irkutsk from here. 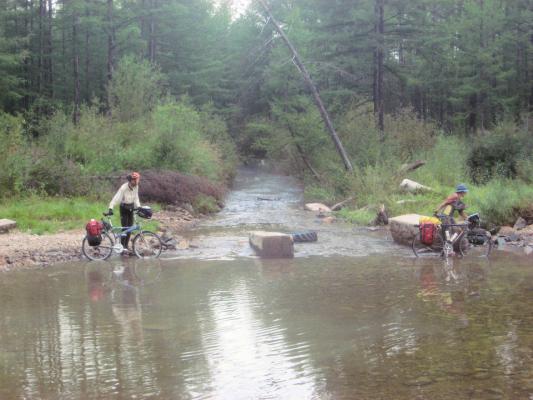 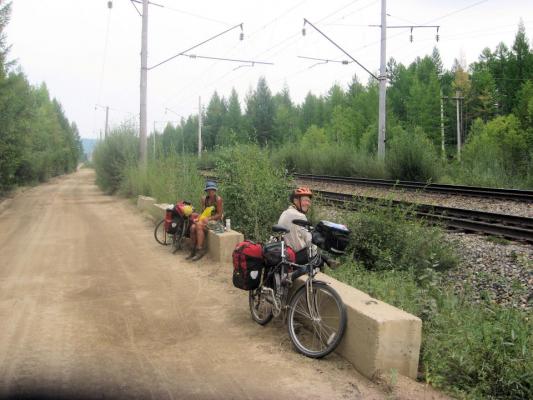