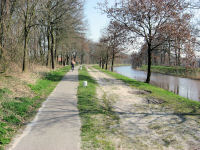 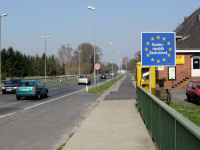 Made it to across the Netherlands and into Germany! Today was another day of great weather, with lots of sun and headwinds from the east. I had a good stay with Tante Gea and Frans in Olst. It was nice to see them again and I appreciate the hospitality. I also dropped a few small items off including my Amsterdam map. I left a little earlier, though surprisingly today was at least as slow as yesterday. I suspect a combination of my tires, winds and conditioning.

Nice calm winds and slightly cool as I set off southbound towards Deventer. I got close to outskirts of town before turning left and following a ring road around Deventer. The next kilometers were a mixture of roads and bike paths as I generally followed signs to nearby towns “Schalkhaar”, “Bathmen”, “Holten”. At Holten I stopped at local supermarket for more to eat. It was a little confusing from here but I found paths via Rijsen and into Wierden. I stopped in at VVV in Wierden and had a helpful person explain routes from here into Almelo.

Almelo was a somewhat large city, so first followed the signs to the centrum and then outbound. Here I came across a “Almelo – Nordhorn” canal with bike path. Since I was going towards Nordhorn, this seemed like a good choice and made for some pleasant cycling without much traffic. I made some good distance along the canal but saw confusing signs around kilometer 64 so turned northbound. This took me on quiet roads and one dirt path via Groot Agelo and into Ootnarsum.

Ootnarsum was a nice little tourist town with a quiet center, a lot of little hotels and a busy VVV office. It definitely looked like a tourist destination. I walked some through town and then set off east again. These roads took me via Tilligte and suddenly I was back at the original canal. I had added at least six kilometers with my detours though also saw a nice town. I followed the canal for a bit, and then came onto the main road leading into Nordhorn.

Around three in the afternoon I crossed the border of Netherlands and Germany. Nice to have crossed my first country, though now I would need to work harder at the language. I followed main roads into center of Nordhorn and then outbound towards Lingen. Bike paths weren’t as consistent as in the Netherlands and I was along a busy highway for a bit. Fortunately, the main Nordhorn/Lingen road had a good path. At 96km I saw a nice hotel and was tempted, particularly since the headwind was stronger here. However, I wanted to get at least 100km today so kept going. At 106km the bike path went directly in towards Lingen. I followed it into center of town.

I passed multiple hotels, but none seemed quite right. I kept going outbound out of town and saw signs for two guesthouses 3.5km ahead. The first one was in Ramsel and was closed. The second was in Baccum and with some pantimine and half German, and a few choice Dutch words thrown in, I arranged a room and had a nice schnitzel dinner. Nice end to a day that was surprisingly longer than I expected.

So far Germany looks a lot like the parts of the Netherlands I’ve just been. Slight differences in road signs (yellow not blue) but similar houses and landscapes.