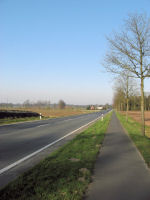 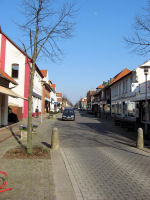 A beautiful spring day of cycling across northern Germany. I even came to a hill that I could coast down. However, for the most it was fairly flat. All except for about 8km was along bicycle paths such as those above left. The remaining 8km was on a sometimes narrow road, but traffic was fine.

Ate breakfast at the guesthouse and set off for the day. Nice calm skies and cool temperatures. Most of the cycling was along bicycle paths. Occasionally these would become sidewalks as I passed through towns and they would occasionally stray from side to side of the road. At 11km was first town of Freren. We had some very slight grades here. At Furstenau there was a quick detour and then back to quiet country roads. This one even had a hill to climb over and coast down. The trees haven’t yet blossomed, and some things are planted in the fields. I see occasional tractors along the way and people working the fields.

At 56km, I crossed a major autobahn, and they had a road side rest area including a McDonalds. I opted to cycle into Holdorf instead. I found a local supermarket and wandered through and found tasty looking things: yogurt, banana, pastry and fruit juice. At the bakery, person in front of me had a sandwich made. I’ll have to learn a few more German words to figure that one out. From here the cycling seemed a bit slower and my front fender decided to rub for a while. Gave me an excuse or two to stop before coming to Diepholz at 76 km. All day the signs had said “Diepholz” so it was nice to get there. Decided to go just a bit further and went through more open countryside to make it to Sulingen. Here I took the main road into town and then asked for a hotel. As can see at top right, a nice quiet main street. Lots of little ice cream places and otherwise a nice place to stop for the day.