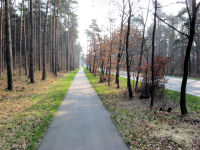 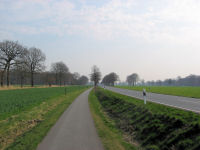 Another beautiful day cycling through Germany. More trees, so noticed the winds a bit less. Many places had bike paths such as those at left or right, and other roads were reasonable. I found it a little tricky to cross the two small cities on my way today: Nienburg and Celle. There seemed to be fewer signs than before.

Had a nice continental breakfast and was on the road before 8am. They let me know I was the first cyclist they had. I wasn’t quite sure if this was for the season or ever. In these places, I’ve been parking the bike out back in the garage. I’d prefer the room, but locking things in the garage seems ok as well. Centers of these towns have bricks and so are rougher than roads outside. Left Sulingen and was soon on some nice smooth roads and paths such as those shown here. Seemed to be making some nice progress in cool morning air. At 24km, the road started to become larger and now the exercise was to cross Nienburg. I first followed bike paths through town of Lemke, and then followed signs to center of Neinburg. A bridge crossed the broad Weser river. From here one or two signs outbound before finding signs to the right suburbs. My detailed German map definitely helped here. After that back in the countryside with easy riding again. Steimbke looked like a nice quaint touristy town. 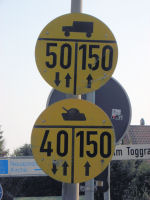 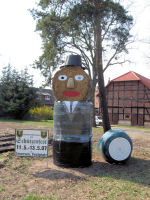 Anyone have a good idea what the sign at left means? (Reply with a comment). I see these signs occasionally. Coming through Schwarmstedt, I also saw a number of military trucks on a field exercise. Soldiers were up manning their guns. Several of the trucks had large blue flags as in “blue team”. Just a little past that, I came underneath the main Hannover/Hamburgh autobahn, and several rest area businesses including a McDonalds. Decided on a McDonalds meal here and saw a number of different soldiers here as well. I wonder if the army exercises include McDonalds?

After lunch, just 28 km on to Celle. Most of this was a flat forest path, but last few kilometers through a few small towns. Outside Celle was a large map. Ok, plan was to go underneath railroad tracks and then eventually northbound across the city. Celle was at 94km and considered stopping here if I found a nice looking hotel. My route didn’t take me past anything too interesting and soon I was north of the city again. From here I decided to go to Eschede, 16km away. My map had the town underlined so I hoped there might be a guest house or hotel. More nice forest path as I came into Eschede. Earlier than previous days by 3:30pm or so.

I found the first guest house. Nobody was there. I waited for a bit and someone came. In a mixture of German and pantomime, I learned they were full. There might be room just down the road. “How far”? “Not very, just around the bend, 5 minutes”. So I started cycling around the bend, up the hill and out of town. Hmmm… I didn’t see anything that looked like a guest house. Decided to turn around. Came into town and next hotel. Sign said something like hotel and restaurant guests, wait until 6pm. I was sitting there weighing my options (cycle to next town 37km away or wait and hope they had something), when I noticed a button for hotel reception. Yeah, they had a room and I was just as happy finding a place for the night.