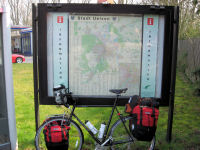 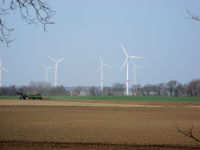 Today a little tougher than yesterday. A few more hills as I made it across the Elbe River and into the area that used to be East Germany. Last night I was one of few guests at the hotel as they had a party with 130 guests. Overnight it rained lightly and there was very light drizzle as I got up. That stopped and rest of the day was clear. I got back onto the bike path at Escede. The path was smooth but there were occasional ups and downs as I crossed some slight hills. Enough to try some different gears. There was a lot of forest here with occasional signs for forest paths. This part of Germany seems to have some forest bike paths, though the distances to towns always seem larger than the more direct routes.

At 20km, the road joined with a larger road and time for a quick break at the gasoline station. I followed this road until it got close to Uelzen, and once again was directed onto smaller paths through town. This town had better signs and wasn’t too difficult to find my way through. Before I knew it, at 38km I was already on other side of town. From here the bike path discontinued at Stocken (45km) and onto the main road. Seemed like there was a bit of a headwind again. More significantly, were some gentle hills. I shifted into lower gears and slowly lumbered over these hills. Could definitely tell the extra weight of everything. Several small towns, one even with a cafe. Enough open spaces to catch some wind, and see some of the windmills such as those above right. There are multiple country signs for potatoes, honey and even some apples for sale.

Once I got to Ziernen, it looked like the largest of the hills were behind me. I was even surprised at a fair descent of several kilometers. Guess I must have climbed some and not just been slow. A few kilometers further, around km 65 or so, the bike path started again and came into Dannenberg at kilometer 77. A nice small city, where the main road went just past city center. More importantly it was flat here. I stopped for a late lunch before continuing on towards the Elbe River. 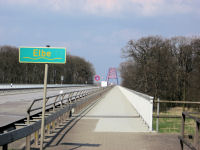 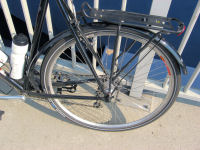 At kilometer 89, I came upon the bridge crossing the Elbe. This point had formerly been a border between East and West Germany. I stopped to take a photo and then cycled the long approach to the bridge itself. Just as I got onto bridge itself, pow! My bike was instantly stopped. As I crossed the bump onto start of the bridge, my right rear pannier had fallen into the spokes. This pushed the fender forward and stopped the wheel. Wow! I took luggage off and assessed the situation. My big worry was the rear wheel and particularly the rim. Best I could tell, the fender had stopped the wheel quickly and spokes looked ok. This type of thing always makes me queasy until I have another 100km behind me…so hopefully all will be ok. I bent the fender back, got things back to looking ok and decided to walk across the rest of the bridge.

From here, I turned east (into the wind) and slowly cycled into Domitz. A very quaint old town with several hotels and lots of old looking buildings. I wanted to get a few more kilometers on the wheel so continued out of town. Here I took the back road via Polz since it was 3 km shorter than the main road. That old road did have some very bumpy sections though so I took it slow. I was ready for a stop as I came into Lenzen. Looks like the wheel is doing ok so far. Weather turned out nicer than expected, so perhaps this was all of the quick system that was coming through.