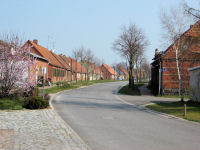 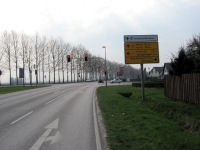 I decided to relax some today, since in my enthusiasm to get underway I found myself too concerned about things I couldn’t change. Instead, just take it a little slower and stop occasionally to check the map or just because. However, still turned out to be a tough day because of some consistent headwinds most of the afternoon.

The day began like many others with continental breakfast. A surprisingly filling amount of bread, yogurt, egg, tea and everything else. The evening before I had negotiated the time. The exchange went similar to several others. I’ll ideally want to get on the road earlier because of less wind. So in half-German I’ll suggest a time. This goes back and forth with the innskeeper suggesting a bit later and a good amount of facial expressions. Today we had settled on 8am.

Nice and cool starting out without too much wind. I decided to try one of the small yellow roads marked on the map as I went to Karstadt. Excellent choice as the road was very smooth and had a slight ride coming from the Elbe basin. At 11km, a brief stop in a village of Mellen until reaching the main road at 20km. This main road like those I mostly followed today didn’t have a bike lane, so on the shoulder and without too much traffic. Every 5-10km or so one would come across a village. I decided those plants I am seeing everywhere are potatoes. Relatively flat areas, though also somewhat open so good chance to give the large windmills some wind. I slowly followed this main road inbound to Perleberg where once again I followed small streets into town.

On far side of town, I stopped at local supermarket. I’ve found these to be good snack/lunch spots and went in for mixture of fruit juice, yogurt, pastry and other things for the hungry cyclist. Interestingly, I noticed that the product code for golden delicious apples is the same in US as Germany (4021). There weren’t many bananas but those they had came from Ecuador. At 36km, it was already 11:30, my slowest day so far. From here the next 40km would be along the main highway to Kyritz. The wind had started to pick up, so it was a slow ride into the wind past the open fields and occasional small town. Fortunately, once I reached Kyritz they had another supermarket. I stocked up on a few extra things since stores will be closed tomorrow.

Kyritz was one of those nice small towns with a cobblestone street. That is even bumpier on a bike than the tiles or bricks. Fortunately, the bike paths were frequently brick. I took a nice relaxing break before finding my way out of Kyritz. The signs were starting to say Berlin and less than 100km now on this road. However, after another 10km, I turned northeast again into a stronger wind and last little bits. 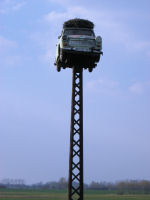 It was another 18km, against the silly wind until I reached the main Hamburg/Berlin autobahn. In several of the small towns I took a bit of a break by walking the bike for a bit to get a break from the wind between towns. As I crossed the autobahn, I saw the car on pedestal at left. The storks sure found an nice place for a nest. The last few km went into town. I found the town center ok, but it took a question or two before I found a local hotel. A very nice little place on the water and cost was even reasonable. What had started as a bit of a relaxing day turned out to be a tough ride this afternoon.

By the way, I added some geographic coordinates to these last few posts so if you click on “Map” above you can see a rough progression across Germany.