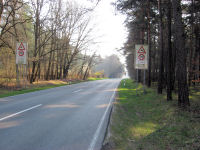 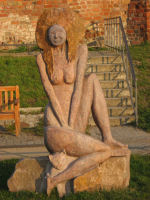 Mostly quiet roads on a Sunday cycle through the German countryside. So far I don’t see much difference between eastern and western parts of Germany. There are fewer bike paths here, but then also fewer towns to go through. I see several other cyclists out on the roads, particularly today. Left the hotel in the quiet morning and half biked and half walked to outskirts of Neuruppin. There do seem to be more cobblestones here.

The weather forecast had said winds from east, but overall I was pleasantly surprised. Winds were lighter and I also crossed several forests. Neuruppin and Alt Ruppin were towns to go through but then it was back to country roads. Not much traffic on a Sunday morning. I had adopted a habit of stopping fairly often, so wasn’t making fast time but was enjoying the ride. Welkow seemed to have a big prison. From here mostly forested for a while with train tracks right alongside. Below left shows one of those big wind turbines they were assembling. Fortunately the windmills weren’t turning as quickly today as yesterday.

Lowenberg was a nice little town and first longer stop at 28km. I had a more complete stop at Liebenwalde at 46 km. This town had a historic old church under restoration. At each of these points, roads went due south to Berlin. Only 40km or so to the outskirts. There were a lot of motorcycles out today, and as motorcyclists do – they would occasionally pass at quick rates of speed. 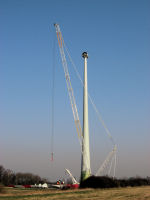 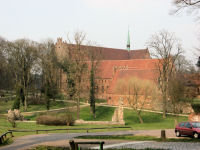 From Liebenwalde, another 20km to pass over the Stettin/Berlin autobahn. In contrast to these autobahn crossings further west, no businesses right next to the junction. After this came more populated areas of Finowfurt and then a long drawn out town of Eberswalde. What I saw of Eberswalde was a little disappointing. Lots of nice old buildings painted in pastel, but a drawn out city where I didn’t cross a nice old core. I stopped briefly for a late lunch and then headed northbound on highway #2.

At 80km, a bike path joined again and the next 20km of forest was a tourist zone. Several small lakes and then a large old monastery at Chorin. Signs explained this area were edges of the terminal moraines from the glaciers (I think signs were in German). There were several small hills to climb over but didn’t take much effort. Also several small lakes on either side and looked like some camping and some vacation houses. I kept going to Angermunde. I haven’t yet visited but the town has a historic center dating to 1233. Definitely several old and historic towns around here.