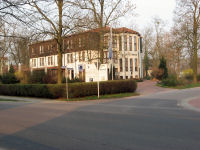 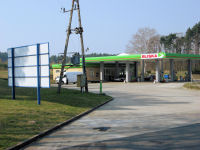 Made it to Poland! First day cycling through Poland was an interesting contrast with Germany. I hadn’t prepared much for Poland nor thought much about the country other than as a large unknown space separating Germany and Russia/Belarus – guide books would be a bit heavy to carry.

Had a nice breakfast at hotel in Angermunde before setting off. Both sides of the Oder River had some hills so there was some climbing and descent today. Fairly busy on the road but otherwise good travels as I went through last few Germany villages before reaching Schwedt at 24km. I half walked and cycled through town and then found road heading east to the Polish border. The river area itself was several kilometers wide with a shipping channel and some broad river areas. As I came close, looked like this would be a real passport control rather than just a sign as I had seen at the Dutch/German border. They stamped my passport twice, once to leave Germany and once to arrive in Poland.

Krajnik Doiny was the town just at the border. Apparently cigarettes and gasoline were cheaper in Poland as there were prominent signs advertising both. Also a lot of open markets with fruit and such. I got my bearings and headed north on the small road along the river. A few climbs and descents. A little rougher road but hard to tell. After 11km, came to a larger road heading north to Gryfino. The road signs were now green after yellow (Germany) and blue (Netherlands). The roads had a few more rough spots than Germany but otherwise good.

After 40km, I came to gas station at upper right. Stopped in to get something to drink and some chocolate. The attendant told me the amount in Polish. I went to pay with a five euro bill. The attendant looked at me funny. So I asked to see the register of how much…6.80. Wow, seemed a bit expensive so I got out a 10 euro bill. He then explained they didn’t take euros only the Polish currency, zloty. Now I felt foolish. I knew Poland was part of the EU, and thought I had heard something about them joining the euro, but that must be in the future and I hadn’t learned enough about the country to even know their currency. I really had treated this like a blank space (though in my defense, I had been confused when gasoline stations at the border advertised prices in euros…but that was just to convince the Germany tourists what a good deal it all was). 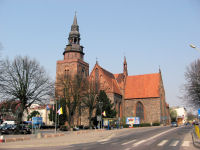 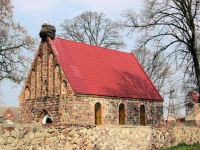 Photo at left was the big church in Gryfino which I reached after 58km. Lots of people out on the streets. I stopped at an ATM to get some Polish currency and then headed east on smaller roads. A little climb out of the river valley and then some gentle hills to climb. This road was nice traveling. One of the small towns had the church shown at right. Look carefully, instead of a steeple, there are two storks building a nest.

Went through small towns and bought some in a shop, eventually coming to a major road at 80km. This one even had shoulders, though I noticed the traffic was using them to get out of the way of passing traffic. Followed this for 4km before eight more kilometers of small road.

The last 10km or so were into the town of Stargard Szczecin, a mid sized Polish town. These towns really aren’t made for bicycles. The sidewalks become narrow and bumpy and prohibit bicycles, the roads are quite busy. I walked some through town and sometimes was on the road. As I came into the center I looked for a hotel. This was tougher than I thought. I got mixed reactions asking people. One or two helpful suggestions. One or two complete cold shoulders as they realized I couldn’t speak Polish. In the end, I didn’t quite find a hotel and was suddenly heading outbound past city limits. Oh well, as necessary I could try me tent I had been carrying along. However, just past 2km from town I saw a small bed symbol at the gas station. A small hotel! It was tough to translate the language – but we figured it out. The hotel itself had seen much better days but was also about a quarter of the price of night before. I was just happy to have a place. I walked back to town for dinner and then turned in after an eventful day cycling in Poland. I also picked up a Polish auto map that seems to give some hints about sizes of shoulders, so may backtrack just a bit to take another road tomorrow.