↓
Home→European Union→Poland→Ryman, where did the cold north wind come from? 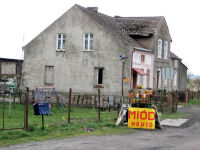 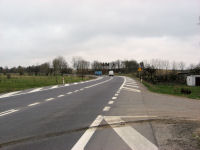 Today a shorter day and welcome break at end of the day at nice hotel. I left my truck stop hotel a little early and headed back to Stargard Szczecin. Without too much difficulty, found the small road 106 heading north to Nowogard. My Polish map showed the major highway along the north (E28 / 6) mostly had shoulders whereas the road to Walcz (10), did not. It would be a bit of a gamble since I’d already seen that the shoulders get used to give oncoming traffic passing space, but decided I’d prefer that to cycling several hundred kilometers with traffic and no shoulders. I’m sure I’ll get enough of that in Russia later.

A brief climb out of the city and then it was countryside again. Lots of potatoes and also some fields still to be planted. It was a little colder today and I actually switched from normal cycling gloves to mittens. There was also a slight wind from the north. Otherwise good cycling with stop in Maszewo at 21km. From there north to the town of Nowogard. They have the Aldi supermarket chain here as well as Germany, so this was my late morning snack. From there walked a little through the town before finding the major road heading eastbound.

The next 30km of this road would not have shoulders. There was a fair amount of traffic, so some careful riding. Trucks generally gave me room and oncoming traffic seemed to check before passing. I only got one truck horn. I also noticed that some locals also cycled along this busy highway so I wasn’t the only one. In a few spots, the road wasn’t even so created rather strange bobbles along the right side. This was awkward to cycle. There was also a more consistent north wind, mostly a cross wind. This and very light drizzle. There were slight hills but tough to tell how steep they were vs. how much I was feeling wind.

At 75km, I came to view at right, shoulders! Hooray, this was accompanied with slightly more drizzle but was nice to have a better place to ride. I had thought about riding roughly to Karlino (113km) but with the wind and not knowing Polish hotels as easy to find, also decided I would stop at a reasonable place. Just as I was thinking that, I came up slight hill to Ryman, saw a nice hotel on the right. Great place for an early stop for the day.

My Polish still isn’t very good. I’ve figured out “yes” and “no”. Many of my greetings and thank yous I say in German and they seem to figure that out.