↓
Home→European Union→Poland→Reblinko (7km west of Slupsk), cycling along the highway 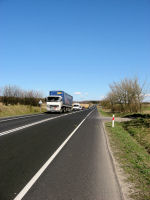 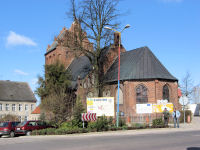 A cold start to a beautiful and sunny day. For the entire day, I followed the same highway eastbound and for the most part, it had shoulders like those left. Exceptions were crossing the town of Koszalin and several kilometers of road construction near 80km today. In hindsight, I really lucked out with the hotel in Ryman, I didn’t see much equivalent for a while. Had a nice breakfast and then packed everything up for the day.

As I came close to Karlino at 25km, I decided to take the road through town. Like most of the towns, the church is in the center and photo at right was the Karlino church. I’ve done several of my stops at the gasoline station and at 30km stopped at the one on other side of Karlino. They seem to have good international pictures of services. This area had very slight grades but otherwise mostly flat and along the highway. It became rural quickly as I headed towards Koszalin.

Reached Koszalin at 50km. These larger places continue to be awkward to cross. I first took roads to the center and then a mixture of bike paths, walking and the main road. Each had their drawbacks. The main road is frequently narrow with lots of traffic. The bike paths weren’t consistent, sometimes fine but often very bumpy. Walking was a nice break but took a bit longer. What I did find interesting was the large number of concrete apartment buildings in town. Looks like a level of construction similar to Soviet Union. Often painted in shades of pastels. Fortunately, by 56km, I was mostly through the town. A bit of a climb from here and then back down to Sianow. 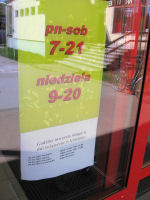 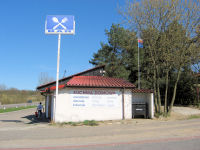 I’m learning little bits of Polish from signs along the way. For example, sign at the left shows some similarities with Russian (Monday – “Poniedzialek”, Saturday – “Sobota”) and was also useful to see stores might be closed both Easter Sunday and Easter Monday. The sign at right shows a more simple translation between Polish and German and English. There isn’t a lot, but definitely more non-Polish on signs here than non-German in Germany. A lot of it you can figure out from context.

After Sianow, the question was to continue to Slawno (96km) or Slupsk (121km). I decided to stop if I found a good hotel but otherwise continue. The land had flattened out some and I actually had a tailwind! Great, it was nice to glide along on open country a little easier. This bike (or more likely bike rider) is slower than it has been on previous trips, so nice to be riding a little easier. Some fields with potatoes and some empty along the way.

At Sycewioe (109km) was a tempting looking guest house but decided I might be able to do better and in deed, found an interesting motel just a few kilometers further. Nice ride overall, and a bit easier. It is still a little amazing to me to be at a small little roadside motel in Poland with a wireless internet connection outbound. Shows the world has been getting smaller.