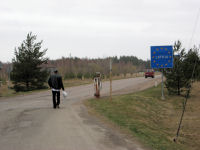 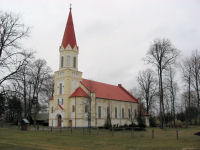 Crossed another border and now in Latvia. Not that I noticed much difference so far between Latvia and Lithuania except that language is different and that I needed to change currency. Cold overcast skies when I awoke with a wind from the west. I wasn’t too enthusiastic about going out in the cold, so dawdled a bit before packing everything on the bike and going again. Two kilometers to the main road and then north to the border.

The road northbound was surprisingly quiet cycling. At 8km, I came to the border. There must be some rules about insurance in Lithuania since several places to buy insurance on the Lithuanian side. Otherwise, no border control or need to check out. Into Latvia, it was a simple passport check and stamp. I used the chance to ask about potential hotels after Liepaja.

The road was a little worse on the Latvian side, but otherwise similar in going through the forest, which helped block the cross wind. At 20km, I came to the first real village: Rucava so took the turnoff to see if I could find a bank or ATM. There was nice church in center of town and a small shop, but no change to get money.

Continued quiet cycling with a few open spots where I could feel the cross winds as I came to Nico at 42km. I had eaten some breakfast things before departure but was starting to get hungry. I followed signs to “i” and even found a (closed) office for the visitor information. However, helpful person here told me there were no places to get money in this town. Otherwise, looked like a nice cute town with a library, hotel, shop and restaurant. 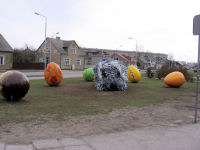 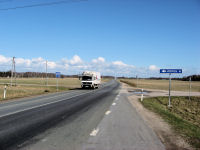 Onwards to Liepaja! At 60km, I came to big sign on the outskirts. This helped me plot a route into town and even showed several banks. Liepaja is a town of 87,000 people but was surprisingly easy to get to the center. I followed side road and then walked along the small tram line for a while. Got myself to the center just before 1pm, hooray! Found an ATM and withdrew Latvian money. Also went to the HansaBank to exchange my remaining Lithuanian money. I must have picked the slowest bank in town as it took 55 minutes before a teller was finally available. The lobby was full, and everyone took a number. However, for a while there was only one teller, and even when there were three they seemed to take breaks or have to spend a lot of time with each customer.

Otherwise Liepaja had a nice town center, and quite a few different big Easter decorations out around town.

After an hour at the bank, I was almost on my way. Stopped at gas station shop for some lunch and then cycling outbound. The west wind was still there so tailwind. The highway was the main one to Riga and busier than the one I had come in on. However, as I got further it became quieter. The sun had come out and it had warmed up as well. There were some gradual hills to climb up and over. There wasn’t much in way of shoulders but traffic was able to pass fairly easily, even in stretches where roads were rougher.

It was starting to be a longer day but found myself to outskirts of Rudbarzi. The customs officer had remarked that there was a small motel in town. I saw a cafe and went to ask about the motel. At the door I noticed a sign with word “Motelis” and so actually had found a motel. Nice place to stay for the night. Internet doesn’t seem as common here as in Poland but am finding nice little hotels to stay at.

By the way, for those of you wanting to watch another cross Eurasia trip: Herman Veldhuizen is about to take off on his trip from Norway to Tibet.