It rained during our rest day yesterday. Early morning showers with thunder and lightning. Enough to knock out power a few times and perhaps the reason the internet cafe wasnâ€™t working in the morning. However, dry after that.

We left with morning mist and saw remnants of showers the day before. We took the back roads to Ð¢Ð°Ð´Ñ‚ÑƒÐ³Ð°Ñ€Ñ‹ rather than immediately back to the federal highway. This meant 6km of asphalt before turning to a gravel road parallel to the railroad tracks. It was nice, quiet and familiar ride with one or two rough streams to cross and some large puddles to go around. Sorry to have Bert leave and not join us in this part of the trip.

Ð¢Ð°Ð´Ñ‚ÑƒÐ³Ð°Ñ€Ñ‹ was a quiet village but we found the main street and a small store. We then asked directions and reached the federal highway at 31km. It started as a reasonable ride, but soon found ourselves back on hard washboard surfaces with large stones. The road didnâ€™t have many large hills but surfaces still made for slow riding. Most cars were polite though a few drove fast and close, throwing up obnoxious amounts of dust.

At 53km we reached Ð¡ÐµÐ¼Ð¸Ð¾Ð·ÐµÑ€Ð½Ñ‹Ð¸ and a nice cafe. Mickeyâ€™s map indicated there might be a service road next to the tracks and we decided to give it a go. It took us 1km to get to the tracks and another 2km of the service road to give up. It was quickly becoming impassible and we backtracked to the federal highway. It was a slow and dusty ride. We stopped at 78km (post â€œ700â€) for water and then it took us another 6km to find a campsite. This area has a lot of marshy ground or bumpy permafrost so it is difficult to just go into the woods and camp. It was a long and tiring day. 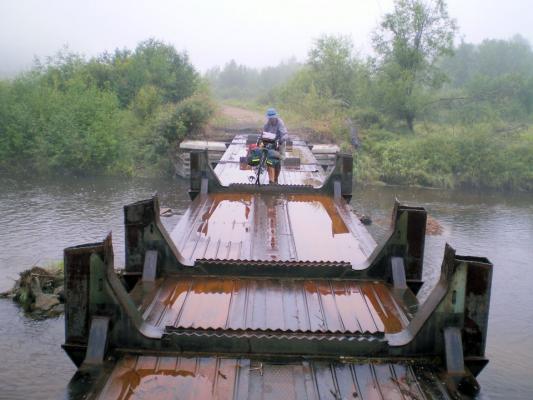 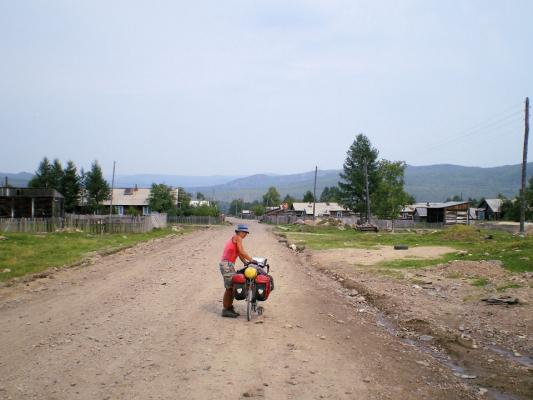