It stayed mostly dry last night and was overcast in the morning. We hoped for drying and improving weather but instead got first drizzle and then rain. The roads were a mixed bag. Some were hardpacked rocks and some were soft peanut butter texture. We followed the old road mostly along the tracks.

We had eaten all our food the day before so hoped to find a store in Ð§Ð°Ð»Ð³Ð°Ð½Ñ‹ at 18km. Didnâ€™t see much here and it was early. As we continued the drizzle increased so Mickey went ahead to Ð£ÑˆÑƒÐ¼ÑƒÐ½ to come at 42km.

When I got to Ð£ÑˆÑƒÐ¼ÑƒÐ½, I could see her tracks but then lost them so asked my way to a store. I found the store but no Mickey. I cycled back through town and then to the entrance. Not sure where she was, I waited for 45 minutes and asked folks. Finally, I decided to continue since I was getting cold and wet. In a few km, I saw her tracks on the road. She had seen me but was busy chasing some youths who had stolen her bicycle pump. She had left town via a different entrance.

By now the rain was steady. We continued for another 24km to reach Ð¡Ð¸Ð²Ð°ÐºÐ¸ and another store. We were cold and wet. Prospects of pitching wet tents in the rain were unappealing. We saw an empty concrete warehouse building. A few doors were filled with trash, but last one was cleaner. We cleared some more and pitched our tents dry and inside. 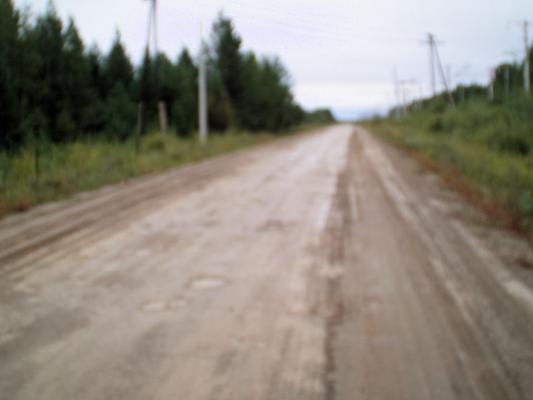