Weâ€™re done with the gravel roads for this trip! It was nice to reach asphalt and know that except for road construction, they should continue. We left with sunny skies and after 4km we had our first asphalt. This ended between 9km and 17km when we went through a construction zone. After this, asphalt!

While our route followed a river, the road periodically would climb hills along the sides. One of these hills was near Ð‘ÑƒÑ€Ð° at 26km. We had a nice cafe stop at 38km. Motorists were stopped at various places today and were applying tape to their cars to protect them on the roads ahead. Meanwhile we were scraping off the worst grime and applying oil to the chain on reaching asphalt.

After brunch, the hills slowly decreased until we came into Ð‘Ð¸Ñ€Ð¾Ð±Ð¸Ð´Ð¶Ð°Ð½ at 70km. This town of 80,000 is the largest in the oblast and had many tree-lined streets between five storey apartment blocks. The road made a few turns before we came to a lakeside cafe at 81km. At least a dozen cars were stopped here applying tape. The sun was shining, music was loudly playing and it had a bit of a â€œbeachâ€ effect.

After this the road went through flat swampy areas. We had a nice tailwind though it was getting to be a bit far by the time we reached ÐÑƒÑ€ at 120km. Now we had the task of finding water. A group of seven adolescent boys were busy playing nearby and thought it was a great adventure for them to lead us to the water spigot while asking questions and trying the simple English phases they knew. We found a place not far from here to camp. All in all, a nice ride. 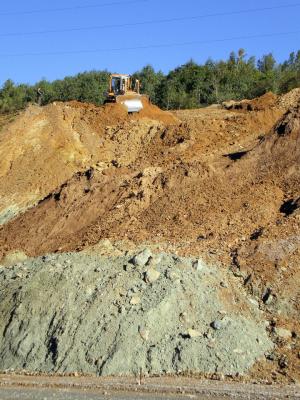 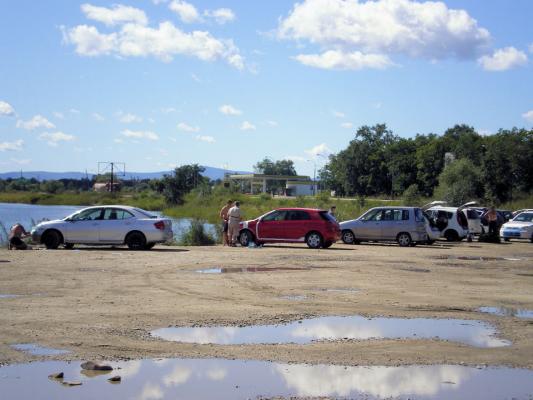